The not so lucky Tom

Home The not so lucky Tom 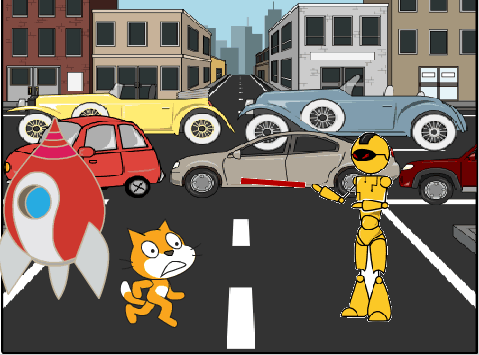 Hello, this is about my animation made on scratch.com for a school assignment. It was very annoying to make it, by the way. The name of my animation is called, ”The not so lucky Tom”. In my animation, the protagonist is called Tom which is a cat sprite from scratch. Tom is both playful and tries to be kind by making a lot of jokes and is from Earth. My antagonist in my animation is called Lucifer, and he is a robot character from Storyboardthat.com. Lucifer is proud and will do anything to make sure that he gets revenge. Some other characters are Larry and a Red Goolbarian. My animation had three acts where act one was the introduction, act 2 was the climax, and act 3 was the conclusion.

In act 1, Tom lands on the moon in his rocket ship and meets an alien (red Goolbarian) from the moon and meets Tom. Tom and the Red Goolbarian converse with each other as Tom is so enthusiastic and joyful to be on the moon. However, then the red goolbarian and Tom get into an argument as to who is an alien as to each other, they are both aliens. Then Larry flies down next to Tom and breaks the argument by saying he was an alien from another universe. The red Goolbarian gets mad as both Larry and Tom start to insult the moon until she leaves. Tom then has a flashback where he also insulted somebody which was one Jupiter’s moon. This is where Act 2 begins.

In Act 2 which is a flashback, Tom encounters another robot named Lucifer. Tom and Lucifer converse until Lucifer insults Tom and then Tom insults Lucifer back. Both of them get mad to the point that Lucifer starts to shoot lasers at Tom. They chase each other and then Tom comes back from his flashback.

Now its Act 3. Tom finds himself aimlessly floating in space and Lucifer in front of him. They confront each other until they chase each other again until they reach Earth. Then, Lucifer kills Tom with his lasers since there was a traffic jam and Tom could not escape.

When I was creating a concept and plot, I wanted to include space since that would mean that they would have to fly which is cool in animation. Then I thought about aliens and thought that conflict between the aliens and one other character from Earth would be the conflict. Overall, I took three stages to making my animation. First I made a script with all the dialogue of the characters and the stage direction of all the characters including the rocket ship, although it doesn’t really count as a character. Then, I made a storyboard on storyboardthat.com. I made a storyboard for each act. In each storyboard which is like a comic strip, I pictured the outline of my plot and main action of characters. Finally when it was time to make my final animation which was done on scratch.com, I had to upload characters from storyboardthat.com and backgrounds. Then, by using blocks and many hours, I made my final animation.