The Neglect of Skid Row

Home The Neglect of Skid Row 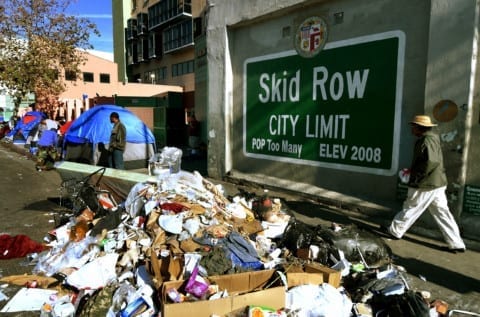 In many cities, there is an image of opportunities and a sense of new hope, so; it leads to more inhabitants filled with goals and dreams. Many of these people only look at cities in a more positive light but it is important to be reminded that these large cities also hold bigger issues.

In Los Angeles, there is a neighborhood called Skid Row. This neighborhood consists of many people who cannot afford to live in a better state. There is homelessness, drug addiction, and severe mental health problems. The helpless neighborhood and people of Skid Row are people that are not assisted, and they should be given more opportunities to be restored.

There are several reasons why the people of Skid Row struggle to compete with the fast-paced environment they are in. Some of these people believe they can “start over with nothing – and frequently end up here with little to no resources” (“What is Skid Row”). This image of a perfect city is a false reality that should not be encouraged. People need to understand other’s struggles and there is poverty. With that cause, there are also “jobs that pay too little and housing that costs too much” (Westbrook). It makes it difficult for people to get back on their feet and try to build a foundation for themselves.

The majority of the people also have trouble with heavy drug addiction and there is a lack of resources to get out of these areas. Many also have cases of mental illnesses that are not properly treated. With these factors, it makes it difficult for the people of Skid Row to rebuild their lives and it becomes evident that these people are not a priority to the city of Los Angeles. It also indicates that they continue to push them out and not produce successful assistance for them.

There have been several pushes from the city and citizens to help Skid Row but with all these efforts, they fail to provide a safer situation for their people that suffer every day to survive. On one occasion in 2016/2017, “voters overwhelmingly approved new taxes to pay for more housing and services for unhoused people. But there have been few visible signs of progress since then …” (Westbrook).

There is support to assist these people but there is no action being done to actually make a difference. The city has also taken legal measures to limit where others can sleep. Many other organizations say this would only negatively affect the people of Skid Row. Luckily, some movements are being made by some organizations but there is almost little effort to specifically assist Skid Row in improving.

Locations like Skid Row do need heavier aid. There needs to be more of an effort from the government and the organizations in Los Angeles to provide them with essentials. The people of Skid Row struggle and fear every day to survive, and they deserve to live better lives like the rest of the people in Los Angeles.

I agree with what you have said skid row people in Los Angeles. In my county, there is always homeless people, “skid row” among the highways and freeways. Many programs and systems are set up to give the homeless a play to stay, a shelter, or food given and new clothing. I believe there should be a safer and better plan because overall you can not take people off the streets if they do not want to help themselves. Everyone has their own situation and own reason and the help is there but only if the skid row really wants to. It’s a helping hand to a better life, to turn their life around from being homeless and sleeping in the streets, on the side of the freeways, etc.

I agree that people need to look beyond the overall view of cities and look at deeper problems . Skid Row is a place that needs more focus on and place not be abandoned and ignored. You made your point very throughly that those people need resources to move forward with their life, they are filled with potential but also with greater problems that can be solved for each and everyone of them. SInce many approved for new housing and services , the people who are in charge need to take action and go through with their plan to fix this situation.