Home The Name that Changed the World 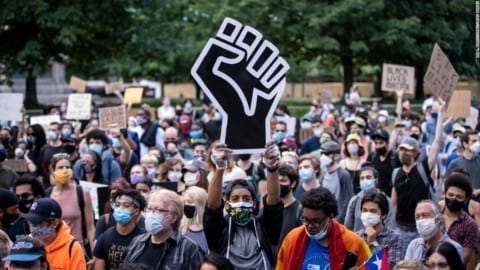 George Floyd, an innocent Black man, was arrested by Minneapolis police officers this past summer in a way that many would describe as ‘inhumane.’ Officer Derek Chauvin was seen on video pinning Floyd to the ground using his knee against his neck for approximately 8 minutes and 46 seconds, resulting in his death. Many were left wondering why this happened, how this was able to happen, as well as how many other times this type of racial inequality has happened within the police force but has gone unnoticed. This event created havoc and uproar across the nation as well as the rest of the world, resulting in the increase of support among the Black Lives Matter movement, which sheds light on police brutality and racial injustice.

Police brutality, “a civil rights violation that occurs when a police officer acts with excessive force by using an amount of force with regards to a civilian that is more than necessary,” is at an all time high now more than ever (US Legal Inc.). Since hardly any officers have been held accountable for their actions, the causes for this issue are usually not addressed and very little is done to change the actions of the officers. Racial profiling among the Black and Hispanic communities and the little to no repercussions for the officer’s actions promote police brutality across the nation (The Viorst Law Offices, P.C.). These two causes have a lot to do with people’s personal biases and opinions, which could have possibly stemmed from how they were raised or how they grew up. Studies show that Black people are about three times more likely to be killed by police in comparison to white and Hispanic people, and 1.3 times more likely if they are unarmed, regardless of the crime (Mapping Police Violence). Another main cause of police brutality is the way officers are trained and groomed. In a study done by Zack Beauchamp, he came to the conclusion that “Officers are conditioned to see themselves as constantly in danger and that the only way to guarantee survival is to dominate the citizens they’re supposed to protect” (Beauchamp). This mentality combined with racial stereotypes make officers more prone to violence towards minorities during stressful times. Due to the widespread increase in cruelty among the police force, many people became sick and tired of the little liability and change done to the officers and police departments, resulting in an increase of support for certain movements.

The Black Lives Matter movement began in 2013, but has since gained support due to the recent events this past year. The main mission of this movement is to “eradicate white supremacy and build local power to intervene in violence inflicted on Black communities by the state and vigilantes” (Black Lives Matter). Soon after the deaths of George Floyd and others, protests and marches started becoming more prevalent across the country and eventually across the globe. As a result of this, the Democrats in Congress in the United States “proposed legislation to reform American Police,” which, in short, promotes accountability of officers. Numerous states have also banned chokeholds and made it a requirement for all officers to be wearing a body camera while on duty. Various sports teams, brand names, and logos were also changed or removed altogether because of the racist background to which they came from. Protests in the United Kingdom also sparked movement within the country, with numerous statues of slave traders or poeple linked to slavery being taken down. In Europe, various paintings of George Floyd with the words “I can’t breathe” were created to spread even more awareness to the cause (O’Malley).

The year 2020 has caused a great deal of divisiveness throughout the country, possibly the largest documented instances involving racial injustice in history. As sad as it is to admit, living in America in the past eight months seems to have furthered the stereotype of the “American Dream” as the events that unfolded this past summer and even up until presently, are circumstances that we should be humiliated as a country to be represented by. Many people have used their voices to bring awareness of the tragedies that are sadly, still occurring and how it must be stopped. The countless times things like this have happened and the fact that very little has been done to stop them from occurring again is very saddening. Though we are slowly moving in the right direction to finally end racism and injustice, something that should have never been a thing to begin with, these protests shouldn’t have started because of the death of an innocent Black man. We as a people should always advocate for equal rights for all. We are all human beings and should be treated with the same respect and dignity as everyone else, regardless of skin color, race, religion, or anything else.

O’Malley, Katie. “How Anti-Racism Protests Have Changed The World In Less Than A Month.”

I really liked the whole message of the last paragraph, and I agree where you talked about how divided we are as a country. I also strongly agree with the last statement and think this whole thing was very well written

Amanda,
I like the point you made about the American Dream possibly having a negative connotation now. Throughout the recent events that has happened in America, most other countries seem to be laughing at us. The injustices happening in our system are flashing bright right now and are in need of reform.