The Most Amazing Version of, “Little Red Riding Hood” Ever Told- With Alternate Ending

Home The Most Amazing Version of, “Little Red Riding Hood” Ever Told- With Alternate Ending 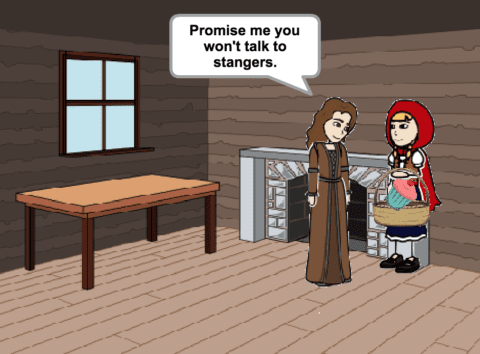 Intro- Almost everyone knows the public fairy tale of “Little Red Riding Hood” made by the Brothers Grimm. Until now, a all new alternate ending is made through scratch. Org. Make a decision of whether Red should speak to the wold or run away, experience the consequences Red deals with throughout the animation. Should she listen to her mother and not talk to the wolf, or follow her own good willed heart/ personal instinct? The stories starts with Red in her own house, then she goes onto meet the wolf in the woods. The viewer interacts with the animation when a typing bar is presented at the bottom of the page. The animation is truly engaging especially with the option to choose an alternate moral ending for the story, with a separate set of consequences. The first ending has Red speak to the wolf disobeying her mother. The wolf then goes to her grandma’s house dressing like Red’s grandma deceiving the little girl. Eventually Red goes to the house and when she is about to be eaten and axemen jumps through the window and kills the wolf with his ax. The alternate ending has Red run away from the wolf, then she feels sorry for him. He continues not to be mean and scary, he admits that he was just hungry. They then go to Red’s grandmother’s house and have a feast becoming great friends. The process of making the animation was quite fun, it required lots of work but I truly enjoyed re-creating the well known fairy tale.

The link above is for accessing my script, and storyboards prior to creating the animation.