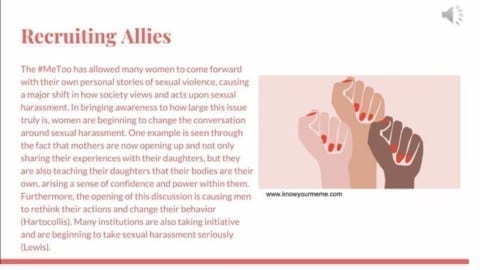 The MeToo movement sparked my interest because of how it is revolutionizing the way we talk about sexual violence as a whole. The MeToo movement was able to spread through the #metoo in which women from all over the world joined in to share their stories of sexual harassment. What made me so passionate about this issue is how it not only affects me but just about every woman I have ever met. Starting from the young age of 10, I have been getting cat-called my men that see my body as an object. There have also been situations in which I have been physically followed by men twice my age. Despite how bad these situations have been, there are still so many women who continue to experience so much worse due to the fact that society teaches us to place our worth in how men view us. Due to this, many women who have been sexually harassed or assaulted refuse to speak out because of the fear that they will be blamed for “provoking” the assault and that they won’t be taken seriously. However, things are finally beginning to change because many women today are coming forward with their stories of sexual violence. This movement is so inspirational because it is encouraging women to challenge societies views and start to take full control of their bodies. This movement has also done a great job in getting men to change their views on sexual assault and in changing the way men act towards women. When I first started this project, all I knew about this movement was that it opened up a platform aimed at getting women to speak up about their sexual harassment experiences. However, in delving deeper into the issue it is clear how this movement is truly about getting women to change a society that has oppressed our gender for too long. Through their stories, women are changing how we act on sexual harassment by making sure it is treated as the crime that it is. As of now, this movement needs to work on spreading to male-dominated fields in which women are treated like sexual objects. These environments are often times very toxic for women who try succeeding since the higher the position, the fewer women there are, making it very difficult to speak up in an area dominated by men. With these issues at hand, it is easy to see how far the MeToo movement still as to go, but it is still very comforting to see how far we have come.