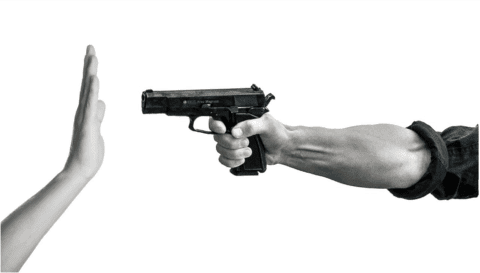 A mass shooting is an incident where people fall victim to firearm violence. The citizens of America are very familiar with the phrase “mass shooting.” Mass shootings are very common in the U.S., and that isn’t something to be proud of. Actually, in 2019 alone, there have been 283 mass shootings in the U.S. (according to data from the nonprofit Gun Violence Archive (GVA)). That is more mass shootings than we have had days in the year. Because these numbers are so high, and people are dying, there needs to be something done to help fix this issue.

Because gun violence has taken over our country, limiting gun violence in America is a task that needs to be managed. A few ways we can help this issue is by banning assault weapons, banning high-capacity magazines, universal background checks, gun violence restraining orders, and simply reporting potential threats. Banning the magazines and assault rifles does no harm to people who have them, but limits the unnecessary use of guns to provoke violence in society. Universal background checks would take the history of a person, and decide whether they should be allowed to own a firearm. Some people shouldn’t be able to buy a firearm so easily, and it could create a first line of defense against those who want guns for dangerous reasons. Lastly, I think the country needs stricter gun laws in general. They are too weak now, and since lives have been lost because of their weakness, action needs to be taken. The Second Amendment, “the right to bear arms,” isn’t more important than American lives.

Gun control could really help our country during this time of violence and hardship. Many countries have gone about this issue differently and have had success. Japanese citizens have to pass a mental health exam, and pass a class to own a firearm. Australia paid its citizens to give up their firearms, and the results have saved lives. Some countries have permissive gun laws and still don’t have as many mass shootings. The U.S. needs to find a way to compromise on how we will develop our public policy to provide safety to the citizens the government promises to protect.

In the article “The Mass Shooting Epidemic” I learned that the United States is not surprised to hear the words “mass shooting” as it is something often done here. 2019 experienced approximately 283 mass shootings serving as proof and evidence of a much needed change in the U.S. The country needs to set forth stricter rules to prevent firearms getting into the wrong hands as it has led to the loss of many innocent lives. Other countries have done something about this problem and have highly benefited from such actions serving as a positive influence to those who are yet to do something about it.

I agree with the statements made in the article demanding change in the country. I really like how to the author of the article used examples and evidence to support their claims regarding the countries who have made a change along with the number of mass shootings recorded in the year of 2019. Reading such claims with provided evidence helped get me more into the topic and helped me make my own claims to demand change.

Would the US benefit more from creating a new law to take under control this current problem or would it be more beneficial to copy the strategies already being used by other countries?

Dear Tomas,
I am persuaded by your essay, “The Mass Shooting Epidemic”, because it really opens my eyes about how the real world REALLY is. It shows me that life isn’t always rainbows and butterflies.
One sentence you wrote that stands out to me is: “Actually, in 2019 alone, there have been 283 mass shootings in the U.S. (according to data from the nonprofit Gun Violence Archive (GVA)).” This stood out to me because it really shows how often mass shootings occur and it’s honestly scary.
Another sentence that showed how important this issue is is when you said: “That is more mass shootings than we have had days in the year.” This stood out to me because a year is 365 days and we’ve already had 283 mass shootings, that’s insane.
Thanks for your writing. I look forward to seeing what you write next because you really showed how much you care for topic like this, considering this topic is very big and opinionated.