The Love Of Liberty

Home The Love Of Liberty 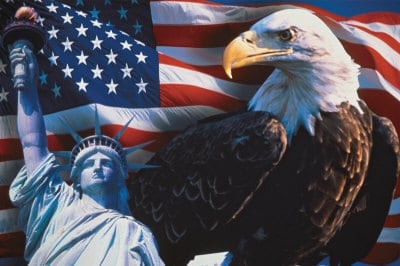 American values can be different for many individuals. There are two in general that I believe every American cherishes the most— equality and freedom. Equality and freedom are two factors that allow a community of people of any race or religion to feel welcomed.

Freedom is a word that identifies America. Freedom allows individuals in this country to have the right to speak up or fight for what they think is right and not be punished. We as Americans try to “speak out when nations violate their citizens’ rights” (Gilpin 2). Freedom is the first amendment of one of the defining documents of America, The Bill Of Rights. It says in the document that Americans have the freedom to press, petition, religion, assembly, and speech. Having freedom as an American is very important.

Equality is another defining value of America. It holds a strong meaning and history for the American people. Americans believe in the statements everyone  “‘is created equally’” and that everyone “ has the same rights” (International Student Guide). Everyone’s interpretation of equality is different and this could be because of past experiences. Equality is so important to Americans that there are “laws that protect this ‘ right to equality’ in its various forms” (International Student Guide).

American values are cherished and valued by every American. They have these values because they know they are kept secure by law. Equality and freedom are two values that people from around the world come to America for.

Gilpin, Caroline C. “What Do American Values Mean to You.” Student Opinion. The New York Times, 2017.

Dear Shreeya,
I think that your use of evidence in this piece is very valuable to your topic. It gets right to the main topic of the passage and accurately shows the reader a representation of the American Values that you mention.