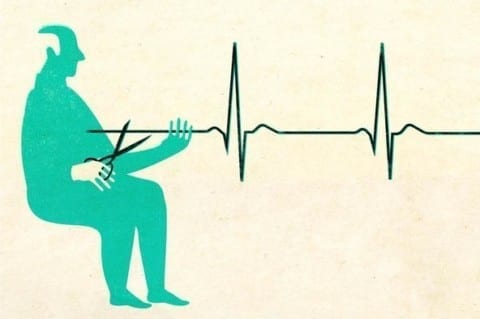 Maintaining life is often much harder than inducing death. The pain, money, effort, emotion, knowledge and strength required to fix a broken creature or support a struggling creature are required to feed the innate desire of life- to survive. The process of healing, whether that may be surgery, treatment, radiation, chemotherapy, physical therapy and recovery will always take more energy and strength than death; energy and strength which are sometimes no longer present.

It comes down to the question: “under what circumstances is it ethical to end life?” Opinions on this controversial matter vary drastically due to a few varying values between people: the difference between animal life and human life, consent of the patient, and the aim of the medical profession. Physicians intend to save or extend lives at all costs, while veterinarians intend to save and extend lives to an extent. The innate desire within humans to survive evidently only extends through your own person, as external factors which often do not affect the decision to pursue an extended life in humans are often responsible for euthanasia of animals. Some of these factors include cost, quality of life and recovery/terminability.

The process of executing a dignified death often prevents pain, extended grief and the expense of maintaining unfortunate life. We see it in animals; families choose to euthanize a four legged family member when they are terminally ill for a variety of reasons, resulting in a prevention of the pain which comes from extending a life frankly not worth living. After seeing the benefits of ending life pre-devastation in animals, why does modern American society struggle so heavily with the process of Human euthanasia?

“Advocates of assisted-suicide laws believe that mentally competent people who are suffering and have no chance of long-term survival, should have the right to die if and when they choose. If people are have the right to refuse life-saving treatments, they argue, they should also have the freedom to choose to end their own lives,” writes National Public Radio in an article depicting pros and cons of physician assisted suicide. They later argue the potential harm which comes with the prevalence of PAS, stating that “medical prognoses are often inaccurate — meaning people who have been told they will soon die sometimes live for many months or even years longer. They also argue that seriously ill people often suffer from undiagnosed depression or other mental illnesses that can impair their ability to make an informed decision.”

While the list of potential harms which are aligned with PAS continues, each point has a significantly relevant counterargument. Sure, medical prognoses are often inaccurate, but shouldn’t the faith placed in modern medicine give the terminally ill a sense of security? At what point does the question of accuracy in a diagnoses allow for PAS? After how many medical opinions, and how much pain does someone have the right to accept their diagnosis and move forward with their decisions? Many argue that “seriously ill people often suffer from undiagnosed depression or other mental illnesses that may impair their ability to make an informed decision.” Everyone falls on a spectrum of ability- emotionally and physically. At what level of cognition must someone fall in order to be deemed capable of making such a decision? Is determining a method of testing one’s decision-making capability possible? And finally, is it fair to prevent everyone who may be eligible for Physician Assisted Suicide from having the option due to potential possibilities?

Lucy,
This topic means a lot to me, as I had an aunt with Lou Gehrig’s disease who decided to pull the plug on her life support. She was almost entirely paralyzed, could barely talk, and was in constant pain, so to her life was no longer worth living. I think that the right to life, which is an inherent human right, also means having the right to end it. While it may bring others pain, often a physician assisted suicide is the smoothest way for a person to exit this world. My aunt, if she hadn’t puled the plug, would have eventually died in a brutally painful coughing fit as her lungs became more and more paralyzed, which would have been a terrible way to die. Thank you for bringing up this topic, I look forward to hearing more.
Thanks, Logan

Lucy,
This topic so controversial in society today, but you managed to provide the information in a way that you did not take a specific stance. Rather you just gave primary information to understand the depths of this situation. It is difficult to determine if PAS is murder or if it is unconstitutional, because the patient is giving their complete consent over a period of days to allow someone else to end their life. Here is a question that challenges ideas about PAS: If a person were to commit suicide would it have the same consequences or reactions as someone who helped them commit at their own will? Here is a website where you can read all about Euthanasia to maybe find an answer for this. https://euthanasia.procon.org/

An intriguing topic, for sure. You presented it well. Personally, I am inclined to state that all human life is sacred; never should we give up on a life. Pain is just a part of the human experience, whether emotional or physical. Though PAS sound good to those that are terminally ill, there is always that chance of survival, as you stated. Whether or not that person survives, however, should not dictate whether or not he or she chooses to end his or her life; I’m a firm believer in experiencing all aspects of life, as you never know whom you may inspire.