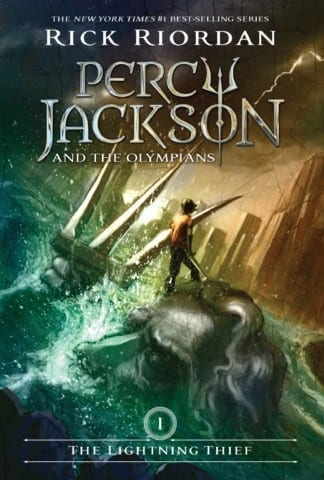 Percy is a dynamic character. His archetype changes over the course of the book. At the beginning of the book, he is the archetypal “the fool”. This can be seen on page 54 , where the author writes:

”I started feeling cranky and irritable most of the time. My grades slipped from D’s to F’s. I got into more fights with Nancy Bobofit and her friends. I was sent out into the hallway in almost every class. Finally, when our English teacher, Mr. Nicoll asked me for the millionth time hy I was too lazy to study for spelling tests, I snapped. I called him an old snot. I wasn’t even sure what it meant, but it sounded good. The headmaster sent my mom a letter the following week, making it official: I would not be invited back next year to Yancy Academy”

But by chapter 20, Percy has begun to transform into the archetypal “the warrior”.  The event that triggers this transformation is Percy realizing that it was Ares who was behind the crimes and Percy fought with him in a one on one duel, and won.  Evidence of this is in chapter 20 where it says, “Ares lowered his sword. ‘You have made an enemy, godling’ he told me. ‘You have sealed your fate. Every time you raise your blade in battle, every time you hope for success, you will feel my curse. Beware, Perseus Jackson. Beware’.”

Percy is no longer the person who gets bad grades and gets kicked out of school for bad behavior.

A reader will recognize that the turning point for Percy comes when he gets mad at Ares . Chapter 20  encourages this belief.

“The giant boar charged. But I was done running from monsters. Or Hades, or Ares, or anybody.” This quote from the text shows how Percy has grown as a person throughout the story.

Dear ian
I am very interested in your poem, “The Lightning Thief ,” because you used great evidence to back up your claim.One sentence you wrote that stands out for me is: “Percy is no longer the person who gets bad grades and gets kicked out of school for bad behavior.” I think this is true because in the book he changed a lot from the beginning to the end.

I was super excited to read your post about the Percy Jackson book because I love them and you explained Percys character very well. I totally agree with the point that he’s labeled as this clumsy “fool” in the beginning of the book but as time goes on he grows into more of a hero with talent and gains respect from all the others. This character development is super satisfying and you explained it super well in this post.

Good job on the evidence. Very detailed and informative.

I think that you really explained the turning point of the character well. I like how you described what he used to be like and what made him what he is like now. This was a well written essay and you analyzed the book well.

Dear Ian,
I am a fan of this book series and of the movies. I enjoyed reading your post because it made me remember back on when I read them for the first time. You are definitely right about how he changes throughout the story. His character development occurs throughout his experiences and what he is forced to go through. As you said, he stops being a troubled student with low self-esteem, to a young man who takes pride in his identity and has a different mindset. I enjoyed reading this, I also look forward to seeing what you post next. I also have a question for you; since you wrote about a book, are you a book worm, or did you just write about it because you happened to have read it?
– Diana Zuniga

Dear Ian,
I was really excited when I saw your post because I also enjoy reading Rick Riordan’s books. I just want to say that you are completely right about Percyś Jackson character change. He goes from being a troubled kid which wasn’t his fault to then becoming one of the most acknowledged demigods at the only age of 12. He proves himself as the end of the series as he is given the opportunity to become a God. However he declines because his heart didn´t desire glory but he had gained friends, his girlfriend, and his family were okay. This just speaks of his great heart and character. I hope I hear from you again.
-Alondra

Although I have not seen the books I know some information from the movies. Percy had a great transformation showing he is truly a great protagonist. Your essay was well written and informing.