The “Land of the Free” Doesn’t Exactly Feel Like It 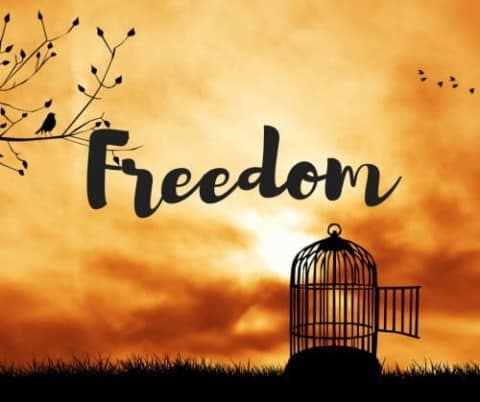 Americans are supposed to live in freedom, we toss our flags to the wind and shout it from our rooftops. But we sleep on the issues. We let all the unrest bubble and burn at the bottom of the pot. “There’s nothing we can do,” I’ve heard people whisper. “That’s just the way it is.” That’s not true. We are fighting and scratching and biting everyday for our right to live. If this is truly our country, if this is the place that crawled off of the battlefield at the end of the revolution shouting that we’re free, then we can always change something. We were built on freedom, but some don’t acknowledge that everyone deserves the right to be safe and happy. In other words, everyone deserves the right to be free. So what’s stopping them? Well, to put it simply, we are. Regrettably, the same things that made our country what it was are the things that are tearing us apart. Even though we’ve put some rules in place,we’re still not there.

There’s also freedom of religion. In the first amendment it’s stated “Congress shall make no law respecting an establishment of religion, or prohibiting the free exercise thereof…” Some people believe that this is a Christian country, but that isn’t true. Muslims, Jews, Christians, and all the others are allowed to live in America.The first amendment clearly states it. Even if there was a religion that was focused around killing people or something, the people in that religion wouldn’t be arrested for their religion, they would be arrested for committing murder. Wars over religion shouldn’t be happening. It’s like if someone asks if your favorite color is blue, and you tell them that no, it’s red, and then they get mad at you and tell you that all people whose favorite color is red should have been killed off by Hitler in World War II. So yeah, freedom of religion is important if we don’t want half of the planet dying off because they don’t all believe in the same thing.

Our history shows that we’ve always wanted freedom. When we were on the brink of war with Britain after they imposed unfair taxes on us, Patrick Henry delivered the famous line “…give me liberty, or give me death!” This line then spurred the people to action to take our freedom from the British. What’s life if you’re not free? When Martin Luther King stood up for African American people across the nation, gaining all sorts of rights for them, they all had that beautiful taste of freedom. Three years ago, when gay marriage was legalized, people rejoiced because they were finally able to celebrate their love on paper, in a ceremony, surrounding by friends and family.

So with all of this, I believe that Americans believe in freedom. But many have a skewed idea of it. They think that owning guns with limited controls is freedom. They believe that keeping America white, straight, and Christian is freedom. They can’t see the other side of the story. American culture is wars. A war made to cut us off from those who loom over us. A war made to free people that have been beaten into submission. One kind of pointless war that involved a tornado and the white house burning down. Wars that we were roped into unintentionally as the world turned and fought and we were caught in the crossfire. A war in order to prove that those with darker skin deserve those rights talked about in the Constitution. Wars to keep us all safe. Wars fought with weapons and wars fought with words. Those wars are the ones we’re focused on today. We’re in a war right now, and we’re fighting to get out. We’re always fighting for that state of absolute freedom to live against people who think someone is lesser than them because of their skin color, or religion, or their gender or sexuality. So I know we’re going to win this war, because people don’t give up their spirit so easily.

“Patrick Henry.” Terms of Estrangement: Who Were the Sons of Liberty? : The Colonial Williamsburg Official History & Citizenship Site, www.history.org/almanack/people/bios/biohen.cfm.