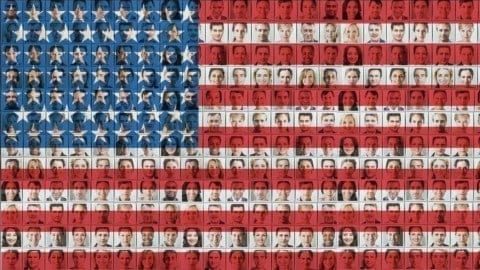 Freedom is one of the most known value in America. It can be seen throughout our country. It is featured in our Declaration of Independence and national anthem. These American symbols express freedom as an individual right. However, freedom signifies more than a right. Freedom has proven its ability to present more important American values. It has allowed values such as diversity and opportunity to become unifying keys for America.

Freedom is what Americans live off of, which has inspired more and more immigrants to come. With immigrants coming each year, diversity has been growing. Diversity progressively has formed a natural spot in our society.  Steven Cohen, a writer from an immigrant family, perfectly summons diversity by stating, “Pizza, sushi, tacos, and Greek yogurt didn’t come from New Jersey… We may not be a melting pot, but certainly are a unique combination of people and cultures” (Cohen, para 5). Often these little things are ignored. American culture wasn’t made under one race. It’s from the diversity that freedom has granted these immigrants. Diversity is important to see as a value to our culture, because it brings Americans together, and form under one place.

Freedom enables opportunity. Opportunity is the reason why immigrants come to America. It’s the way for others to chase towards different paths. No one is going to be the carbon copy as their peers. In Building an All – In Nation, Ruy Teixeira, John Halpin, Matt Barreto and Adrian Panoja  persuade that, “… Americans are most likely to see opportunities from rising diversity than they are to see challenges” (Barreto, Halpin, Panoja & Teixeira, para 5).  Under this moral, America has turned into a united working class. Seeing others from a different race gives hope to emerging Americans. These types of awareness increase the confidence of freedom and seeking opportunity in America.

However, diversity and opportunity hasn’t always been accepted as American values. They were often challenged by prejudice, which limits freedom. There is still this ideal that say races, other than white, should not be accepted. However, Civil Rights activist, Martin Luther King fought back those threats. He used his own American values in hopes of creating a diverse country with equal opportunity. His hopes expressed freedom, which made him to create the “ I Have A Dream” speech. In this speech, King declares, “I have a dream… one day right there is in Alabama little black boys and black girls will be able to join hands with little white boys and girls as sisters and brothers” (King, para 5 ).  When King emphasizing this belief, he was standing under the government, a symbol who allowed freedom. Being at a symbolic place of freedom has encouraged those who were afraid to stand up for their beliefs. Together, they fought prejudice. Together, they experienced the freedom given to those who needed it, African Americans.

There are so many values expressed in our country. There is no right answer. As long we find and express them, America will  continue to be a unified country. We are diverse, we are free and we are the land of opportunity.

King, Martin Luther. I Have A Dream, 1963, Government Achieves. www.archives.gov/files/press/exhibits/dream-speech.pdf