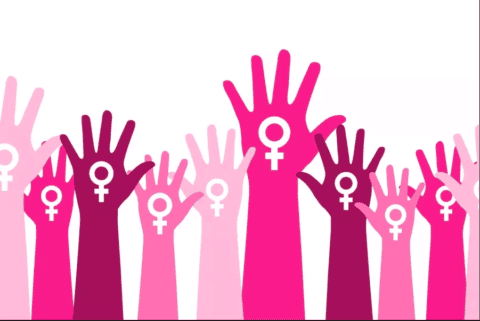 In recent years we have seen a change in the way society views equality, specifically gender equality. This is often times a touchy subject. Many people argue that women and men are treated equally in America, feminism is a poison being shoved down the throats of adolescent boys and girls. It is something used by mainstream media to distract us from the real problems in the world like childhood hunger and the opioid epidemic. However, the negative effects of gender stereotyping are a lot worse then they may seem.

One major problem society faces is the hegemonic myth. This is the perception that men are the dominant sex, strong and independent, while women need to be protected. This myth has been around for thousands of years, and sadly it still exists today. As girls enter adolescence, silence and modesty are instilled as desirable values, as girls are pressed to behave in a “modest fashion.” These qualities are commonly associated with vulnerability.  Messages such as “don’t sit like that,” “don’t wear that” and “boys will ruin your future” reinforce the gender division of power and promote sex segregation with the aim of preserving a girl’s sexuality. Boys are still perceived as a danger to girls because of their vulnerability,  a bias with negative impacts for both genders.

Many researchers are beginning to think that parents are to blame for these social constructs. The reinforcement of gender norms and stereotypes are drilled into infants and toddlers, sometimes without the parents even realizing it. One in five moms of sons and daughters admit to letting their sons get away with more turning a blind eye to a behavior in boys for which they would reprimand girls. Mothers often times underestimate their daughters as well. In one study, mothers wrongly estimated how steep a slope their 11-month-olds could crawl down. Moms of boys got it right to within one degree but moms of girls underestimated what their daughters could do by nine degrees, despite the lack of motor skill differences in infant boys and girls. This also follows the hegemonic myth. Boys are associated with strength and fearlessness, and its almost expected of them to do well when it comes to physical activities. Girls are coddled from the time they are born, watched over and protected. These qualities that we push onto children have lasting negative impacts. It implies to girls that no one believes in them, that they won’t amount to anything. It pressures boys and gives them unrealistic expectations.

We see the hegemonic myth being used during adolescence as well. According to the Washington Post, one of the most common fears or concerns of a teenaged daughters parents is that their daughter will become pregnant while she is still in high school. Yet, on the same list, this fear ranked 9th when it came to teenage sons. Teenage girls get the reputation of being rebellious and irresponsible, so they are given stricter rules. The interesting thing is that according to statistics that rate drug use and even the proneness to get into car accidents, the most reckless among teenagers are males. The National Associations of Insurance Commissioners says that most insurance companies charge about twice as much to insure a teenage boy than they do a teenage daughter because a teenage boy is twice as more likely to get into a car accident. Teenage boys are more prone to being involved in violent altercations with other people, to commit a serious crime and teenage boys are more prone to frequent alcohol use and to commit suicide than their female teenage counterparts. Additionally, according to the CDC, teenage boys also have a tendency to lose their virginity earlier than teenage girls and are less apt to be advocates of safe sex.

While many may think the United States has progressed, it still has a long way to go before there is complete gender equality. We still hold onto old social stigmas and gender stereotypes that have been proven wrong. These misconceptions have negative consequences as well, and as a collective society we should strive to change the way we look at gender and truly push for gender equality.

Tess,
this was an excellent article and very well written. This is a very important topic and I cannot thank you enough for sharing. The myth about these so called gender roles has been very prevalent and domineering for so long now, that nobody even knows why or how they originated in the first place. As a society, we are slowly seeing a change in this regard, and I cannot wait to see where the future takes us! Well done!

Tess, I love your article. I think it’s so important you are discussing this topic and trying to understand why there is gender inequality. It’s interesting that you found some evidence of parents starting this gender inequality at home and that Moms have learned to underestimate their daughters and not their sons. I also believe this has something to do with education. In my lifetime I was never taught about gender inequality in school and never taught how to deal with it. The other day my brother was saying how their teacher is a strong feminist and has started having the young girls write “womyn” instead of “woman” to rid of the word man in the female gender. I think this is the wrong way to teach youth about feminism and women’s rights. It’s important that our youth and upcoming generations learn to support both genders and work towards no inequality. In this sense it seems schools are teaching girls to rather hate our male counterparts and despise everything our country was built upon. Women have been fighting a long time for their rights and adolescence should be taught that fight. I think it’s so important you are addressing this topic. We need to help our youth learn about man and woman the right way. I also think sex education is an important topic to be discussed in every school and would eliminate much of our problems with sexualizing a woman and rape. I found this article on how to teach your kid gender equality. I think it will help your article because you can give ways to help change this inequality in our society! (https://www.cnn.com/2017/09/26/health/gender-equality-teaching-children-parenting/index.html) Keep writing!!

Tess,
this is a great article to highlight the gender inequality gap. I really don’t like when people limit “the gender gap” to differences in wages, because it shows just how much of a blind eye we turn to other societal problems. My question is, where do you think this comes from? Why, even hundreds of thousands of years after the creation of humans, are women still disadvantaged in society? Additionally, I like the way you use “hegemonic,” since I feel like that word is typically reserved for foreign policy and nations. In this case, the relationship between men and women is not much unlike the relationship between a nation and one that is “inferior.” Given the chance, that nation wouldn’t be inferior at all, but there is such an inherent early advantage to the bigger nation that there is seemingly always a “gap.” Anyway, thank you for writing this article, and I am excited to see where this paper goes.
Hunter

Tess, this was a really interesting article. I knew that sexism has been internalized in us from an early age, I just wasn’t sure exactly why. The studies and data that you showed was really surprising, but sad. It would be interesting to hear from you what parents can do to instill equality into their children from a young age. It would also be interesting to hear what you think about gender roles, and how this affects people.

Tess, it seems like if gender equality hasn’t really changed in the past thousand years it will never change. I find this somewhat upsetting, but we have made major progress over the past few decades. I did not know that there was a specific name for the idea of the hegemonic myth and this is something that has not seemed to change very much over the past few decades. Overcoming stereotypes is very difficult. I am very curious to know if you chose to write about this because you have a twin brother and you have been raised slightly differently than him? I must admit that I succumb to the myth and I do let males take dominance in just about every aspect of my life. I think a big reason I am a part of this myth is because I am involved in a sport in which males are much more skilled than most women, so I have naturally let that idea creep into my life. I have been raised in a family with four girls and one guy, so you would think that this would not have been the case with me. Well, I guess not… I found some information as to why men are more dominant, mainly focusing on the differences between the male brain and the female brain, and I think it would be great if you included this information in your research essay. Thank you for this interesting research, and good luck with your paper!
https://www.netnanny.com/learn-center/article/165/