The Harmful Side of Religion

Home The Harmful Side of Religion 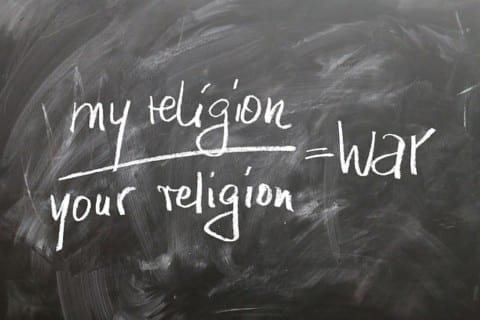 According to https://www.salon.com/2014/11/17/6_reasons_why_religion_does_more_harm_than_good_partner/, more than 50% of people said in a Huffington Post survey that religion today causes more harm than good, and that “even among those who describe themselves as “very religious” 20 percent say that religion is harmful to society.” There are many reasons for this, most of which stem from the Internet, where there are thousands of videos of people from Isis beheading innocent people in the name of God or even less profane things like lists of strange beliefs held by certain religions of the world. However, I am not of the belief that this is a good reason to think that religion harms society more than it helps it. There are other much better reasons that should be given a lot more consideration.
First, one only has to look back on our history to see that there have been many, many religious wars that have killed millions of people. It is true that some of these wars would have happened regardless of religion, but not all of them; leaders throughout history have used religion to get what they want, attacking people that believe something different and thus do not belong with them in their society. This leads to point number two: religion creates a dynamic of us vs. them, insiders vs. outsiders. There will never be one single religion that all people are a part of, so there will always be people that are not a part of one’s own faith; while most people that are a part of a religion now are able to accept people of other beliefs, there will always be some that believe people that are not a part of their faith are inferior. It shouldn’t necessarily be that way, but unfortunately there will always be people in this world that try to tell the morality and quality of a person based solely on whether or not they are a part of their religion.
Third, and perhaps the most important in today’s world, religion promotes helplessness. While most religions indicate that we have free will and can make our own choices, there is typically a higher power involved in religion that makes all of us and our contributions to society minute. Not only this, but often times people use prayer and pleading with a God they don’t know is real to get what they want instead of going out and trying to get it themselves. There are many people who choose to pray for things like equality and other good moral values that we need in our society but refuse to go out into the world and try to make the change themselves because they believe that their God will do it for them. This is dangerous in certain situations, especially if someone that is struggling to make ends meet prays for it instead of trying to make it happen themselves. If prayer is accompanied by action, then prayer can be effective as a motivator. However, too often in society people replace action with prayer as opposed to using it as a facilitator and that can be dangerous.

I found your article to be very insightful and I agree with your point of view on religion. Although religion has been the source for a lot of good in the world, it has also brought so much war, violence, and inequality in the world.

I do find your article really interesting Zach! I think it is a weird thing to think about, how something that is supposed to lead us to good can lead to so many conflicts. I think it is really hard to think about how many lives have been lost over the topic of religion. I do think that religion offers some good into our society, but is also astonishing how much harm it can bring as well. I read this article on how religion can hurt our society, and I think you should check it out!