The Harlem Renaissance By: Veronica Chambers 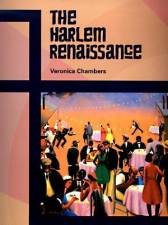 (Since this story doesn’t revolve around one person, I thought I would create the protagonist as a whole. Basically making the “protagonist” all the African Americans involved in this change.)

African Americans are the dynamic characters. Their archetype changes over the course of the book. At the beginning of the book, they are the archetypal world redeemers. This can be seen on page 12-13, where the author writes:

“Whatever their motivations may have been, the critics’ fanfare was justified. The awards dinner was one of the key events of the Harlem Renaissance, a movement that began early in the 1920s as an assertion of an African-American artistic and cultural identity.”

But by page 16-20, African Americans have begun to transform into survivors.  I say this because all the things they have started to establish and create over the years. For example “Nonetheless, the shows established a number of black singers and dancers (most famously Florence Mills) as bona fide stars.”… , “The Jazz craze reached Harlem soon after that, and the explosions of new nightclubs and cabarets charged the neighborhood with musical energy.”…. , “Despite the explosion of African-American creativity.”…

African Americans  are no longer the people who can be “controlled”(quotations indeed), they are not owned by anyone, and are not any less human than anyone walking down the street. There people as they always were.  Their past does not define them and the people they are to become .A reader will recognize the turning point for African Americans when their story gets repeated as a defining moment in history. Page 23 encourages this belief. “How did Harlem become the center of a black cultural revolution? The story of the Harlem Renaissance is actually many stories: of politics and power, race and gender, and especially art, music and literature. For perhaps the first time in American history, African Americans were able to see themselves as inheritors of an ancient culture that was rich and more varied than many could have imagined.”

Dear Drew,
I am fascinated by your post about the Harlem Renaissance because of the way you portrayed the city of Harlem and the beautiful cultural era that characterizes it. The image complements the vivid and mesmerizing imagery in your account, and the strength and artfulness of your language gives light to the power behind the people of the Renaissance.
Something that stands out to me in particular is your takeaway: For perhaps the first time in American history, African Americans were able to see themselves as inheritors of an ancient culture that was rich and more varied than many could have imagined. I think this sentence is absolutely essential to the passage and could not be omitted without taking away from the purpose—yours as an author as well as the heroes of the Renaissance. But more than that, it rightfully enforces the time as a recognition of culture that was long there already, one that was currently in a roar of creativity and illumination renewed and that would call for further acknowledgement in the years ahead.
Your post reminds me of the fascination I’ve developed over the years with the city of New Orleans. From art, books, articles, shows, and the like, the history of New Orleans and the cultural bones of its structure seem like a hub of creativity and stories both told and untold. It gives me the sense of a place of immeasurable timelessness, one that has retained every memory and sound and being that has passed through. Past the mayhem of Bourbon Street and the inner city, moreover, the people to be influenced by there seem endless in supply.
Thank you for your project, and I look forward to reading what you write next because I love the animation and meaning your language holds. Especially if you write something in follow up or in comparable fashion to this post, I’ll anticipate seeing it. I appreciate your reach into the culture-oriented history of a city I haven’t learned enough about.
Sincerely,
Hannah