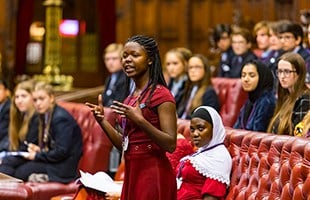 One thing you said that stands out for me is: “I see from so many and they actually take time to read and understand our history, the history of the labor movement, civil rights, history of racial struggles, history of economics, history of the United States, history of colonialism.” I think this is confusing because when we are fighting for something we have to pass things. Why does this thing exist? In order to win the fight or in order to fight.

I don’t agree with you that when you say that the new generation is badass. One reason I say this is that there is not a badass who will learn something about what there want before they start fighting. All badass never do good things.

I’m especially inspired by the video by Xiuhtezcatl because of the issue the guy is talking about. The issue was about climate change. In this video, the guys did not advocate for a solution for no only his people but for everybody in the world as you do you are fighting us and also for the new generation. In this video, he said that he works with young people around the planet to fight for their air water and atmosphere for their generation and also fo the next generation. This video sparks for me because it is about one of the most important issues in the world that everybody contributes to it and there is note anything we can do. But as we know when we discuss an issue that we don’t have and solution for it, we get the solution at the end of the discussion.

In the video, Xiuhtezcatl says, “What I learned to form my cultural heritage is this life is a gift and it is our responsibility to respect and protect which gives us life.” https://www.youtube.com/watch?v=27gtZ1oV4kw&list=WL&index=116&t=0s. Accessed 8 Mar 2020.

This is basically saying that it is our duty to protect all the things that give us life in order to make the future butter. At least for the future generation.

I’ve also been learning about the youth revolution is also one of the most powerful things that never existed before. When I read it, I saw that there was imaginable. They used methods that no one thought about and no one thought it will be worth it.

I think this history is a good example of/supports/makes me wonder about something you said in your video: “you said that this new generation cares about other people experience.” I don’t agree with you here, because we don’t care about it. We just care about ourselves. We don’t want this bad experience to repeated in the future. If it has to repeat we don’t want it to happen to us, therefore, we have to fight to avoid its repetition.

I am feeling very happy by your letter “The Future Started Yesterday,” because the title makes me think that our future started at the ready . We have to take more consideration of what we are doing right now because of the impact on the environment. I support both videos. These teenagers are a pretty good example of activism who want to cause change in today’s society.

One sentence you wrote that stands out for me is: “ In order to fight we need two groups: one in the streets to convince people outside to fight for their rights and another group inside the government to convince the government to vote for the law.” I think this is important because people in the government should also support the society’s opinions. Trying to solve the problems that all of us face.
Another sentence that I liked was: “This is basically saying that it is our duty to protect all the things that give us life in order to make the future butter.” This stood out for me because we destroy the planet, we are responsible for taking care of the planet and no one is going to do it for us.

Have you seen this article https://dailycampus.com/stories/2020/4/22/how-you-are-d estroying-the-plaNet-and-how-you-can-do-better I thought you might be interested in this because explain who have being blame for the pollution in the earth.
Thanks for your writing. I look forward to seeing what you write next.