The Fox And The Grapes By Aesop Remastered

Home The Fox And The Grapes By Aesop Remastered 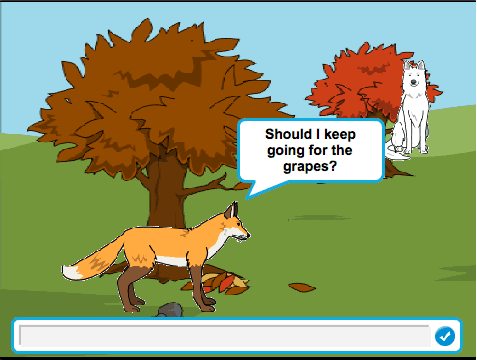 I’d like to tell you about my fairy tale project on scratch. The original story, “The Fox And The Grapes” by Aesop is about a fox who was very hungry and decided to go out to find something to eat. He stumbled upon some grapes hanging off of a branch and decided to try to get them but he failed after leaping several times. His moral decision was that he left the grapes, calling them sour and he left them still hungry. In my alternate ending, the Fox continues trying to go for the grapes and at last, he finally gets them even though he now has very sore legs. To fit the requirements of having each act be at least 1 minute, I had to add to the script of the original story. Furthermore, I added a part to both endings having the Fox getting another snack.