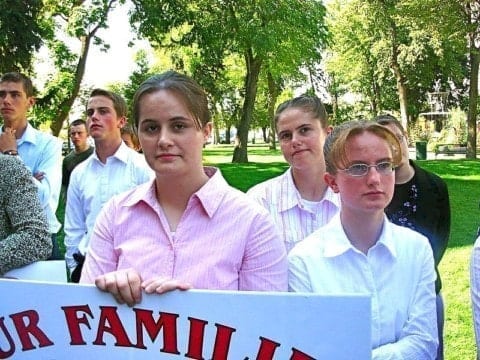 This article details a woman’s funeral, Foneta Jessop, and how the community comes together on occasions like this to show the bond that they have together. It is stated that 3 to 4 thousand people come to the 15-20 funerals in the flds church each year.

It then touches on a raid that happened in 2008 when a call was made from inside the compound by a 16 year old girl who claimed she was being sexually and physically abused by her middle aged husband. Texas SWAT was sent in on a televised raid that was headlining the news. A Texas appeals court later found that authorities had not met the burden of proof for the removal of the more than 400 children, and most were returned to their families within two months. This brought a close investigation on the group and investigators found 12 church members guilty to charges such as bigamy and sex with a minor.

The article states “Members of the faith describe the life that the Jessops and other founding families have built as idyllic, one in which old-fashioned devotion and neighborly cooperation are emphasized and children are raised in a wholesome environment free of television and junk food and social pressures. Critics, on the other hand, see the FLDS as an isolated cult whose members, worn down by rigid social control, display a disturbing fealty to one man, the prophet Warren Jeffs–who has claimed to be God’s mouthpiece on Earth.” Church members have different ideas on many things and their opinions are outlined quite well.

For example the idea of plural marriage to some may be completely fine in the community but other women have said that they become jealous or upset when their husband decides to take on new wives. The article touches on the history of plural marriage beginning when Joseph Smith started polygamy in 1840 and preached it to his followers in 1843. He had a revelation that God shared with him in which “plural wives were to be taken so that the faithful might “multiply and replenish the earth.” After the 1890’s the mormon church no longer supported polygamy and that is when the Fundamentalists branched out to different parts of Utah and other states. “Upholding the covenant [of polygamy] has come at a high price. The 2008 raid on the YFZ Ranch was only the latest in a long list of official actions against polygamists–persecutions for simply adhering to their religious principles, in the eyes of church members–that are integral to the FLDS story.”

Although the issue of underage marriage within the church has garnered the greatest negative media attention, Dan Fischer has championed another cause, the so-called Lost Boys, who have left or been forced from the community and wound up fending for themselves on the streets of Las Vegas, Salt Lake City, and St. George, Utah. The math behind plural marriage shows that men who have 20 to 30 wives mean there will be many more women than men and this is why so many men are kicked out of the compound. The church says it’s kicking these boys out for being disruptive influences, but if you’ll notice, they rarely kick out girls.