The Fight Towards Equality

Home The Fight Towards Equality 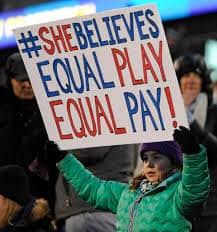 Unequal pay between men and women is sports has been an ongoing issue. Women have been fighting for a while to get equal pay, but there still hasn’t been any visible change to this issue. The men’s sports industries are multibillion dollar industries, whereas women’s sports industries are not. For example, the salary cap for women in the WNBA is $117,500 compared to the NBA where the minimum starting salary is $580,000.

This exposes the problem that many professional women athletes are frustrated with. But this hasn’t stopped them in their professional careers. Especially the best female team in the world, the U.S Women’s National Soccer Team. They are the ones that started moves forward in the long fight towards equality. In 2019, the team filed a gender discrimination lawsuit against the United States Soccer Federation in hope of seeing change.

This discrimination isn’t just about the amount they are getting payed. It also comes in where these women play, how they travel to matches, how many fans come to watch the games, the medical attention and coaching they receive, etc. It isn’t on the same level as the men, and that is the big issue that many women are trying to get at. They still aren’t satisfied. They will continue fighting for the equality they believe they deserve. So now the question becomes how is the inequality between male and female sports going to be solved? What is going to be done to fix this issue? Only future can tell.