Home The Essence of the Civil Rights Movement 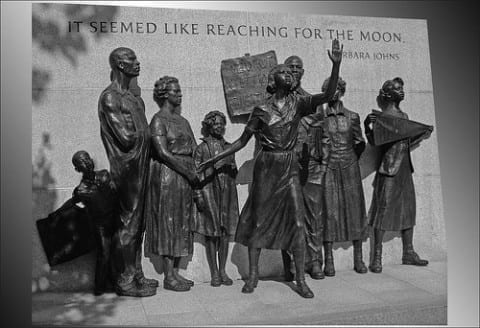 Civil Rights movement was a movement that took place in the year 1950 to 1960. This movement was for “blacks to gain equal rights under the law in the United States” (History). This movement began because African Americans were treated differently and didn’t have the equal rights that every American born child is supposed to have. The movement was not only meant for the present people but future generations. As time went on, the South didn’t like that the African Americans were getting the same rights as them so then came the “Jim Crows laws”. The name Jim Crow came from a fictional character named Jim Crow, who was a black slave (Andrews).  African American’s had so many restrictions in the South because of the Jim Crow laws. These laws caused them to be completely separated from the whites. “Blacks couldn’t use the same public facilities as whites, live in many of the same towns or go to the same schools. Interracial marriage was illegal, and most blacks couldn’t vote because they were unable to pass voter literacy tests.” (History). The book The Help talks about the Jim Crow laws. “Books shall not be interchangeable between the white and colored schools, but shall continue to be used by the race first using them” (Stockett Pg 173). The book shows that the Blacks were treated with no respect and that they were segregated from the whites. Do you believe that everyone nowadays has equal rights and opportunities?

Your article is very fascinating and reaffirmed many things I have learned in my history classes. I like how you related this information to the book The Help because I think that is one of the books that best represents the situation in which Blacks lived. Personally, I think everyone nowadays still does not have equal rights and opportunities, especially minorities. This is very unfortunate because we should have learned from our past mistakes, and started treating everyone better. What do you think?