The Electoral College Is Broken

Home The Electoral College Is Broken 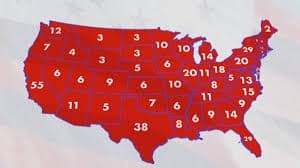 I believe, and so do many other people I know, that a key value to american culture is the ability to make your own decisions. Decisions that range from the most basic parts of life to the most advanced parts of society. I would like to talk about one of the decisions that is most important to us, voting. More specifically, how we vote for a president, what role the electoral college plays in that, and why the electoral college causes more problems than it solves.

In order to understand the problem the electoral college is causing, we must first understand the electoral college itself and why it was created in the first place. The problem began when the founding fathers were writing the constitution. They needed a way of electing the president that satisfy a variety of constraints. After months of debate and brainstorming, their solution was the electoral college. There were a few reasons why creating this entity was their solution. One, if the count of votes was based purely on the popular vote, the south would always be at a disadvantage because of a higher population in the north (Goldman). Two, it would be difficult to get a decisive popular vote based on the entire nation (Goldman). The electoral  college solved these problems by giving the power to individual states not individual voters. .

There are some more points that are also worth noting to understand the electoral college. For one, it was largely the brain child of Alexander Hamilton, who proposed the idea of the electoral college. The way he saw it, electors would be educated people who would be able to make a good decision about who should be president (Epps). This was to be the solution to the problem of how a president was chosen. It is important to know this because it explains why a president can win without a popular vote. In fact, when you are voting, you are basically voting for an elector, who then votes for the president on your behalf (Epps). This system is essentially still the same today, with some changes to address certain problems with the system.

Now we come to the problems themselves. The first, and most noticeable, is one that has already been mentioned. A president can get elected without winning the popular vote. This has to do with something called “winner takes all”. This situation means that if a presidential candidate wins a state’s popular vote, they win all the electoral votes from that state, regardless of how many votes they actually won by in the first place (What). For example, if a state has twenty electors and a candidate wins the state with eleven of the twenty votes, they receive all twenty votes. Another problem, although rare, is that electors do not always vote based on the vote of the people who put them in (Electoral). This means that your vote many not actually count for anything, because your elector might choose to vote differently from the popular vote.

This next point comes from Jack Rakove of Stanford University. In an interview by Corrie Goldman, Jack Rakove had this to say about the electoral college, “I believe the existing system has two fundamental – I wish I could say fatal – flaws. One is that it violates the one person, one vote rule, which should be the proper rule of a modern democracy.” Here he brings up the point that people are not directly voting for the president, and so the one vote does not seem to matter. As he states, the one vote principle is a rule of modern democracy, meaning that the electoral college is an obsolete solution, as it was created to solve a problem at the very beginning of our nation’s history. Jack Rakove brings up another issue in this interview with regards to what are called “battleground” states, “The second problem is the whole battleground state issue … This problem would disappear if we had a truly national election with one electorate and votes counting the same wherever they were cast”. This shows another fatal flaw. Because of the “winner takes all” style of electoral college voting, some states matter more than others and are worth more for a candidate to put time into pleasing.

The question is why does the electoral college still exist if it has so many flaws? There is one main reason for this. People don’t want to go through the amendment process that would be required to make the changes (Goldman). States would rather just make their own rules because it is easier than going through the process of changing the Constitution, which is considered to be too much work. However, considering all of the flaws in the system and that there are professionals saying it should be changed, this is definitely an issue that should be considered worth the time and work required to fix it.

Hi,
I found your article very interesting. Here is an article I think you would enjoy reading that further discusses the electoral system https://www.commoncause.org/page/fix-the-broken-electoral-college/.
I am learning about the electoral college in my U.S. Government class and I agree it needs to change. I see that it was created to give the smaller states more representation as opposed to just a popular vote. However, having the very few elites of the country decide who is in charge, goes against the idea of democracy in America. I liked how you stated popular vote does favor more states than others. I think a new system needs to be created, but I do agree that people do not want to take the time to go through and change the constitution. However, living in a time that is changing, new rules need to change. We need a system that better represents our country and puts the power back into the people. I really enjoyed your post.
-Alysa

First of all, great post! I loved your evidence and ideas. Your argument made me reconsider everything I knew about the electoral college. We were told at a young age to follow everything the government told us to do but I think that this is one of the main things that we should fight to get abolished. I also think that when the electoral college was first put into place it was a time when people were less educated and only the rich went to college, but now everyone has an understanding of politics and elections so there should be a change to the electoral college. Popular vote is the smartest thing to do in order to get a right candidate.
Thank you for sharing this post with us, it really opened my eyes to new ideas.\