The Dog and the Wolf (remixed)

Home The Dog and the Wolf (remixed) 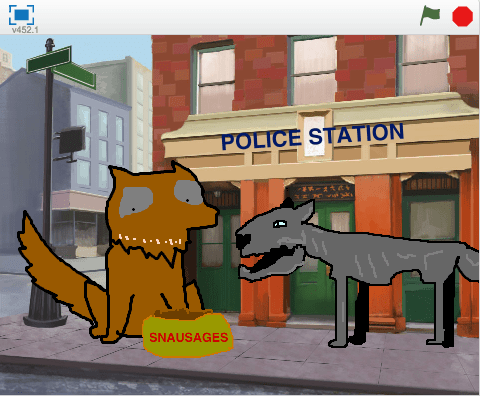 This unit in Technology, we were assigned to make an interactive story based on a fairy tale or fable. I worked on Aesop’s “The Dog and the Wolf”, a tale about a gaunt, hungry wolf that meets a dog with an offer for food.

I personally loved animating this (well, as much as you can love a homework assignment). Most of all, making the costumes. It was so fun having the liberty to make my characters look as bogus as I wanted them to be. And I did exactly that. However you might disagree and think it’s a complete masterpiece, which I’m perfectly fine with.

I had a problem where everything I would put in the main code after the main decision simply wouldn’t happen. This is because I was putting the code in a separate script that was supposed to run as a second chance for the player to make the decision if they failed. I fixed this by just putting it in the main code.

Here is the link to my script.

Oh boy, this script. Although at first it seemed particularly easy and simple to make, those assumptions stung me back later on when animating my story. Firstly, the lines were simply too long. I had to split most of them into two in my animation. However, I guess this is not as bad as it added a few extra seconds to strike for the 1-minute mark in each Act. Secondly, the Act 1 Script did not nearly last long enough. I had to add some lines were the Dog got angry at the Wolf for not particularly loving the idea of being chained up.

Here are my storyboards. Here is the storyboard that comes before the main decision takes place.

This storyboard was not too much trouble to make, except I forgot to add the asking method in the first time I did it.

The Dog and the Wolf (remixed) Act 2

These are the two possible outcomes of the main decision.

This storyboard is another story (no pun intended). Firstly, there was only a limited amount of rows you could make (10), and since we were occupying one column with one whole separate ending, this was pretty problematic. However, by merging some cells, I eventually got the result I wanted in the maximum 10 rows allowed. In Cell 10 of Act 2B, my storyboard was rejected by Storyboardthat.com for “having too many sprites”. Whether I spammed “Scooby Snax” sprites even more than in the final product is up to you to decide…

I hope you enjoyed viewing my interactive story and reading the behind-the-scenes (I wasn’t really behind the scenes. It’s a computer screen.). Now hopefully this will encourage you to do one yourself! Just kidding, you won’t need that encouragement, you’ll probably have to do it for homework anyway.