The Diving Bell and the Butterfly

Home The Diving Bell and the Butterfly 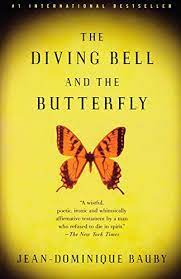 The Diving Bell and the Butterfly by Jean-Dominique Bauby is his memoir about a traumatic life-changing event that happened to him in 1996. Jean-Dominique Bauby was born April 23, 1952, and died in 1997 at age 44. He lived a happy life with a family of 2 kids in Paris, France. He was a French journalist, editor, and author, and well known. The Diving Bell and the Butterfly was one of his noble works. This memoir was written to tell the story of this traumatic event. The book is about his locked-in syndrome. He goes into detail about the life he lived while he was in the hospital with this syndrome. The book is very interesting and aids the understanding of what exactly one with locked-in syndrome goes through. The book has many notable moments but one that stands out the most is the way he never gave up trying to communicate with the outside world.

He suffered a cerebrovascular seizure that left him in the condition he was in. Locked-in syndrome paralyzes a person almost entirely; the only part of the body that often functions is the brain, in this case, the muscles of his left eye also functioned. He never recovered but he survived what is a locked-in syndrome which is explained in this book and gives the understanding of that kind of life. He allows this memoir to be read as if we were in his situation. The theme truly is imagination for the reader and his memory plays a big role in the book. He describes all details of being in room 119 of the Naval Hospital, along with all the memories of his “normal” life.

His survival skills with this locked-in syndrome when reading are truly amazing. He is looked at as a vegetable. The book leaves one in awe by the way he chooses to fight the battle he was put in rather than giving up. He never gave up making connections to the small things around him in the small hospital he was in. He used his memory to keep him alive. He used the body he was left with after his stroke to make connections to his past. He talks about smells, pictures, noises and so much more throughout his book that allows us to understand who he was before the stroke and who he was after. He opens up about his fears and dreams. In the book, he goes into great detail about his memories and creates a world of his own in the hospital. He also finds a way to communicate with the help of a speech therapist.

The Diving Bell and the Butterfly teaches one so much about the life of a locked-in patient. It is a motivational book that gives reason to be happy and thankful for the opportunity of life each reader has. His communication is challenged yet the fight of the challenge never stopped for Jean-Dominique Bauby. It is extremely interesting to learn the life of a patient in a hospital that stays there for months, even years. However, this story of a talented patient with locked-in syndrome will touch one’s heart.

I really liked your review and summary of this book. It makes me want to read it! I think that your explanation of what happened and the struggles make me seem more intrigued into what happens throughout in detail. Thanks for the great synopsis!

Karen
This book sounds very interesting. It sounds like the main character is very strong and is a fighter. I definitely have to read this one!

Karen,
Your review was well-written and gave a good overview of the book. I like how you described a bit about the syndrome this man had, as well as how it changed his perception of the world. I want to know more about his experiences and the book in general since I have never heard of it before. I liked how you addressed how “the way he never gave up trying to communicate with the outside world,” indicating that despite the condition he was in, he never gave up hope. This really makes me think about life and how fleeting it is. I look forward to reading more of your writing in the future.

Karen,
I really like how you wrote this book review you gave great background of the book. I have never heard of this book before but after reading your review I was drawn to it and so interested in this memoir. You provided a lot of great detail about the book and made sure everyone saw the main idea. I like when you said “ It is a motivational book that gives reason to be happy and thankful for the opportunity of life each reader has”. I liked how each reader can relate to the book on a personal level. You did a great good writing your review and I hope to read this book.

Karen,
That seems like a very interesting book. That would definitely make me think about things that I don’t usually think about especially because it is a memoir not fiction. I am definitely going to put this on my list of things I want to read!