The Debate on Raising the Minimum Wage

Home The Debate on Raising the Minimum Wage 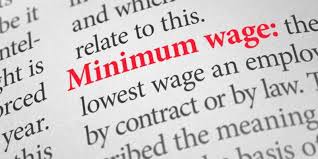 This question has been the center of many political debates in the past few years. As of now, the national minimum wage is $7.25. Low income workers can barely subsist on these wages, let alone save enough to advance beyond their low paying jobs. An average job payed at minimum wage makes about $15,000 a year, a ridiculously low salary to live on. In 2018, I don’t understand how can we allow our fellow humans to live in such poverty, despite their best attempts to work. I have taken mimic wage paying jobs before as a high school student, and I cant imagine trying to live off of that paycheck.

The minimum wage has not kept up with inflation. Inflation slowly erodes the real value of minimum wage, leaving workers with a paycheck that can’t buy as much as it did in previous years. Those who are payed at minimum wage live below the poverty line.

According to the Economic Policy Institute,  across the phase-in period of an increase the minimum wage to $10.10, the GDP would grow by about $22 billion, resulting in the creation of roughly 85,000 net new jobs over that period, actually helping the economy.

However, there are valid arguments against raising the minimum wage. As journalist Harry Holzer points out in a Times article, by making unskilled workers so expensive for employers to hire, minimum wage increases can reduce employment among the very groups that need help.If the minimum wage is increased, companies may use more robots and automated processes to replace service employees, resulting in leaving employees without an income.

Also, raising the minimum wage isn’t the only to combat the poverty minimum wage workers live in. Holzer also argues that if we want to help low-income workers, there is a more sensible approach: combine more moderate minimum wage increases with some expansion of the Earned Income Tax Credit (EITC). The EITC provides a tax credit for every dollar earned by a worker in a low-income household, and it is refundable—so workers with no tax liability get a check from the government.

Even if raising the minimum wage isn’t the answer to improving the lives of those in poverty, something must be done.