The CIA Wanted To Kill American Innocents, And May Have Killed The Man Who Stopped Them

Home The CIA Wanted To Kill American Innocents, And May Have Killed The Man Who Stopped Them 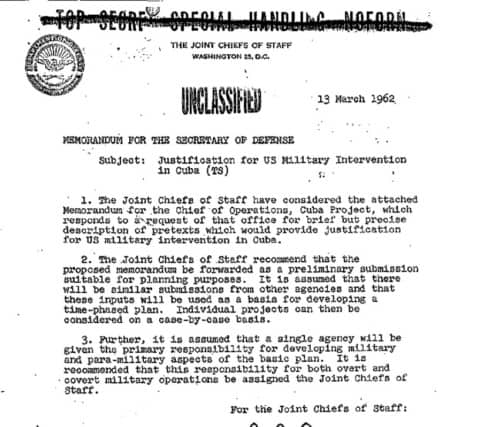 More conspiracies have been confirmed than you might think. Take examples such as Watergate and MK-Ultra. Today’s conspiracy is no exception…

The U.S.A. had a habit of going to war with communist states “just cuz” during the red scare, and in March 1962 one General Lyman L. Leminitzer had his eyes set on Cuba. There was just one problem-Cuba hadn’t made any offensive moves to warrant war. Thus the ingenius idea of a false flag operation was thought up. In Laymen’s terms: THE CIA WAS GOING TO ATTACK U.S. SOIL AND BLAME CUBA.

The plan included planting friendly cuban agents on a U.S. military base and staging an attack, firing mortars into the base from outside, and the sinking of a U.S. ship. Once this plan was concocted it war brought forward to president Kennedy for approval. He promptly rejected it, and after other requests for war with Cuba fired General Leminitzer. These are the facts, time for the wacky shenanigans.

Everyone and their moms knows at least 2 Kennedy assassination theories. A popular theory is that the CIA murdered JFK after his rejection of Operation Northwoods. This theory has not gone unnoticed by the Government, as evidenced in this file pulled from the NSA’s website:https://www.nsa.gov/Portals/70/documents/news-features/declassified-documents/jfk/jfk00020.pdf . It depicts how the CIA “allegedly” orchestrated the event and even supplied Lee Harvey Oswald with ONE of the rifles used. I highly recommend you give it a read because this article of mine isn’t the best and it’s a fascinating subject.

This is quite the interesting post, to say the least. When I first saw this I thought “Oh great, another ridiculous conspiracy theory.” But then when I saw the unclassified document it changed EVERYTHING. I can’t say I’ve ever seen another conspiracy theory backed with evidence quite like this!

Well I can’t say I am surprised. Thanks for your post. It seems to be another nail in the coffin of secret government agencies trying to undermine its citizens. Secrecy is often a sign of corruption in these sort of events, and there silence speaks louder than words. For further info check this out.