The Children of Hameln (The Pied Piper of Hamelin): Animation by Yours Truly

Home The Children of Hameln (The Pied Piper of Hamelin): Animation by Yours Truly 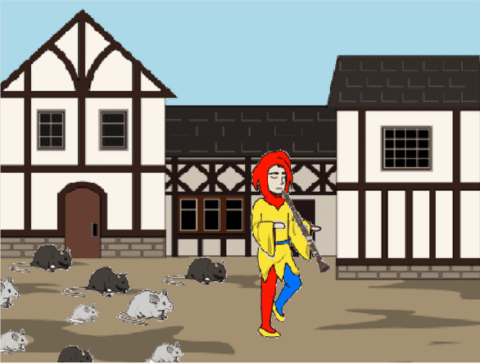 Hey! Are you bored? Then watch my “wonderful, amazing, spectacular, fabulous, beautiful” animation based off of the hit fairytale, ‘The Children of Hameln’ by the Brothers Grimm, Jacob and Wilhelm Grimm. You won’t regret it. I promise! (DISCLAIMER: NO MONEY BACK GUARANTEED)

The Children of Hameln is a fairytale about keeping your promise. The once peaceful city of Hameln was plagued by rats. The distraught citizens seek out the help of the Pied Piper, a man in bright colored clothing, who promises them the extermination of the rats in exchange for guilders (money). The Piper gets rid of the rats using his fife, which controls the rats and drowns them into the River Weser. The citizens promise, but they never intended to keep it, leaving the Piper exiting in rage. In return the Piper kidnapped the children of Hameln, showing that promises should be kept.

In my animation, the alternative ending includes the citizens keeping their promise, ultimately leading to the protection of the city, as the Piper provided the citizens with a conch shell. The conch shell calls upon him when they are in harm’s way or in trouble.

Through a periods of weeks, I created this animation by creating the concept, writing the script, creating the storyboards and making the final animation. Creating the concept was easy, and I researched about fairytales to find the appropriate one for me to adapt upon. After that was the script and I used the original story to base my script off of. The storyboard was made by taking what I wrote in the script and reflecting it in pictures. And finally making the animation, which is made using Scratch.

^ The link above sends you to my project submission if you want to take a closer look at my script and storyboard mentioned above.