“The Chess Game” A New and Exciting Scratch Animation!

Home “The Chess Game” A New and Exciting Scratch Animation! 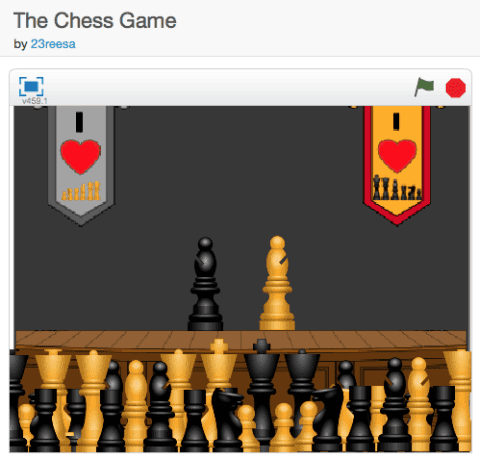 There are four main Characters in “The Chess Game”; the white queen, the black queen, the white bishop, and the black bishop. The white queen is content in her lifestyle of fighting the black chess pieces, and has no intention of changing the circumstances of her life at the moment. The black queen has clear views of who the white chess pieces are, and has no intention of finding out if they are true. The white bishop from the beginning questions the system, and learns that the preconceptions laid out to her from society were wrong and that it is time to step up and do the right thing. The Black Bishop goes through a transformation as well, learning that society had the wrong views and that being different isn’t bad.

“The Chess Game” by Abigail Rees is about not judging people for their differences and how everyone is equal. In the beginning you see the white and black bishops are questioning their community about the views laid out before them that they are supposed to just accept. The queens assure them their is complete logic to the system. In the middle when the chess game begins the white bishop and black bishop meet, when they figure out that they are both equal pieces the queens come over. The queens remember when they first saw each other and were afraid of their differences. In the end both colors of chess pieces lived together in harmony respecting each other’s differences.

When Abigail was creating “The Chess Game” she was inspired by other scratch animations to make one about inanimate objects. Abigail decided to center her project about equality because it was a major issue in the world. Once Abigail had her idea she began to create her script. Once she finished her script she began her storyboard. The storyboard really helped Abigail plan out her animation. She then began coding her project. She had many challenges and overcame them. Finally this resulted in the project Abigail has today.

The Chess Game is a new and exciting scratch animation by Zeky Films. Filled with action, suspense and emotion this is an animated short film not to be missed! The story follows a young boy who discovers the game of chess and uses it to escape from his troubled life. The film has been made using stop-motion animation techniques, using clay figures. We have used many different camera and lighting effects to create a unique atmosphere for the viewer. The Chess Game will not only entertain you but also shows the art of animation in a different way just like website https://essionslive.com/casino/lucky-niki/ provides you the excellent casino experience where you can have fun and earn money.