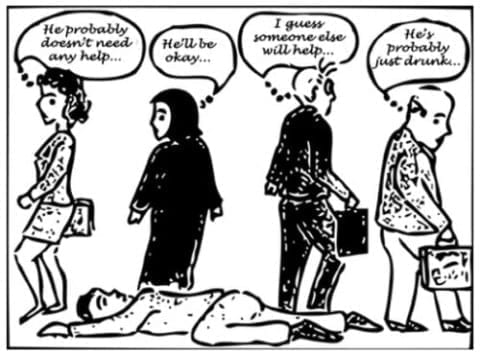 One night, in March 1964, a young woman named Kitty Genovese had parked her car and was walking towards her apartment building, however, she never made it. That night Kitty Genovese was brutally attacked and killed, however, even worse is that despite kittie’s cries for help, out of the reported 38 people who witnessed the attack, not one person helped her.

This case got a lot of attention, not only from the media and public, but also from psychologists, all of whom wondered what could have possibly stopped all 38 of those people who witnessed the attack from helping her. In the article Bystander Effect Can be a Killer ,it addresses some of the discoveries psychologists made after looking into the case. For example in 1968 psychologists discovered that the more people present during an emergency situation the less likely they are to help, however, if faced with the same situation alone we are much more likely to help, this was then referred to as the Bystander effect. This article also touches on the factors that influence the bystander effect.

One factor is known as diffusion of responsibility, this refers to when large groups are faced with some sort of issue or emergency, and because the responsibility is shared among so many different people no one feels that they are solely responsible and it becomes much more likely that the individuals in the group will think others will help. In a way this is similar to any sort of group collaboration, whether it is in a career or in school. Even in these situations because the responsibility is shared, it is more likely that there will be individuals in the group who assume that others will fill in the gaps for them if they fail to do their part, just as a bystander may expect someone else to take action if they fail to do so. Another factor is that we as a human race tend to greatly consider the reactions of those around us when making our own judgements about a situation. This becomes especially common in emergency situations because they are often unclear, so therefore we are more likely to asses the judgements of others to come to an understanding about a situation.

Therefore it brings up an important question, do we have a responsibility, if we are witnessing a situation that could possibly be an emergency, to step in? Or does it depend on the situation.  Should we be held accountable to intervene even when there are other people who are witnessing the same situation.

Hi Mason,
I think your article was very interesting. I think that the bystander effect can apply to the politics in our country today. It seems like people care about certain issues but refuse to get involved. Take gun control for examples, there have been so many mass shootings and nothing has been done to control the guns in our country and the people who own them. It wasn’t until the recent Florida shooting that the actual victims have started to take a stand and voice their concerns with the NRA.
I think you would find this article very interesting, I have included some annotations:
https://www.psychologytoday.com/basics/bystander-effect

Mason,
I thought your post was interesting since we are all guilty of not standing up for others or being a bystander. I really liked how you gave an example of this situation by describing the Kitty Genovese story. I think its crazy that 38 people saw this attack happening, yet not one of them tried to help her. It brings up your question of why don’t people intervene. Your idea of group responsibility or diffusion was insightful since I think often times we assume someone else will help so you don’t have to. Yet if we all have this mentality, nothing will get fixed, such as in the Kitty Genovese case. http://www.personal.psu.edu/bfr3/blogs/applied_social_psychology/2011/12/the-bystander-effect.html this article was interesting because it described other possible reasons people might not help each other, as well as who is more likely to help someone based on race, sex, etc. Hope to hear more!
Chloe