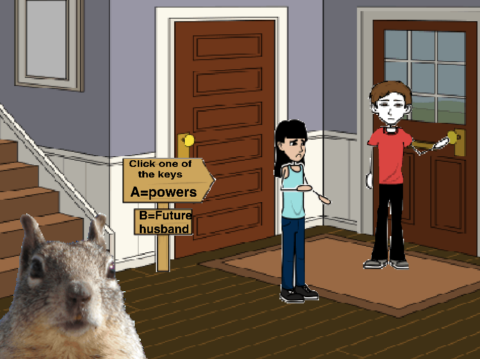 People read fairy tales all the time and usually, they all have a moral learned through a bad decision the main character makes. In “The Bride’s Death-Song,” by Lady Francesca Wilde a story about a girl who has powers to know the weather as long as she doesn’t tell anyone about it. She decided to not tell her betrothed about it even when she knows the weather conditions will be so bad that he will die because of them. She chose a morally bad decision and ended up paying the consequences by dying alone in depression with no one to love, not letting go of what happened. In my scratch animation in addition to the original ending, I display the alternative ending in which she chooses to tell her betrothed and sacrifice her powers for him. She ended up dying happily. This may not seem like a hard process to make this animation, but it was. I made a script, revised it, made storyboards for the first act, one for the original ending and, one for the alternative ending. Including all the dialogue in my script and the actions and backgrounds from the storyboards, I managed to make my animation.

Check it out down below, it’s pretty interesting and entertaining!

If you check out the document below, it shows all my hard work required to make this scratch animation. It included my script with the multiple edits and my storyboards.