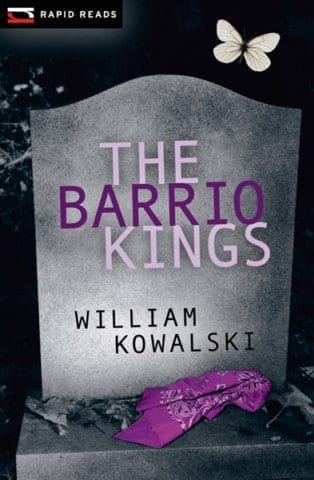 THE BARRIO KINGS by William and Kowalski  might leave a reader feeling interested Because it shows you how a gang members life really is. An example of this is on page 125.  “I’m not a King anymore. But they’re a part of who I was. And who I was is a part of who I am. I’m not ashamed of myself anymore. I’ve just got my eye on my future, instead of my past.”

The book is about a protagonist named Rosario. He does not have an easy life. He’s trying to move past his days as a banger. His girlfriend is going to have a baby, he’s finishing his G.E.D., and he’s about to get a promotion at work. There is one problem: his best friend from the Barrios Kings, his former gang, has just gotten out of prison and needs a place to stay. This does not make Rosario’s girlfriend happy in the least. As it turns out, Juan has an agenda. He wants to avenge the death of Rosario’s older brother Tomas, and he wants Rosario to help. Rosario is torn between two worlds—the world of the past violence, which took his brother’s life, and the world of his future, which is represented by his girlfriend and his soon to be born son Emilio. A drive-by shooting is about to turn his life upside down whether he likes it or not.

The Barrio Kings is a fast-paced thriller of a book. Even if reading is not your favorite activity in the world, this book may really grab your attention. Rosario’s problems are tough, and he’s going to have to make a choice: his old life or his new life. He can’t have it both ways. You can see this on page 81 and 82 “ Tomas,” I whisper, I asked you if I did the right thing before, and you sent me a sign. But things are different now. So I’m asking you again for help. Show me the way brother. Let me know what to do.” this show when Rosario’s is  confused about which choice he showed make his old life or his new life but before he chose he want his dad brother to tell him the right choices he should make.This book is a good book. I think whether or not someone has actually been in a gang like Rosario, a person can relate to the way that Rosario feels trapped by his life and is going to have to make choices that are bound to make some people happy and some people really upset.

Dear Tigist,
This sounds like such an interesting book, and I look forward to reading it in the future. This book reminds me a lot of I book I read late last year. The book is called Tattoos on the Heart by Greg Boyle. In his book he speaks of his nonprofit organization Homeboy Industries where he has helped rehabilitate thousands of gang members. In his book there are many people like Rosario who struggle to move forward with their lives after they leave gangs. If you really enjoyed The Barrio Kings you might also enjoy Tattoos on the Heart.