The Ass, the Fox, and the Lion Remixed

Home The Ass, the Fox, and the Lion Remixed 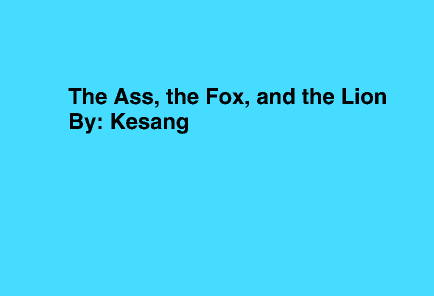 My story “The Ass, the Fox, and the Lion” by Aesop Fables is a story that shows the consequences of one being selfish. The protagonist or the Fox makes the decision to sacrifice his partner for a guaranteed escape, however the Fox gets tricked as well and gets eaten. Even though this is a short story, animating it was a long process. The story is about two animals, the Fox and the Ass, they become partners to look for food and encounter a Lion that wants to eat both of them.

In my animation there were a lot of broadcast and receive blocks, I did not have many mistakes in animating this story. The biggest problem was the procrastination that I went through because even though I had everything planned out it I did all of the on Saturday and Sunday. The project for me was successful because my animation turned out pretty good, however I saw animations that are unbelievable. My script was shorter than what the characters ended up talking about because I needed more dialogue and more details for my animation to meet the requirements. 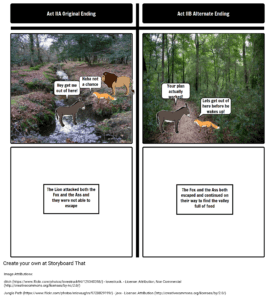