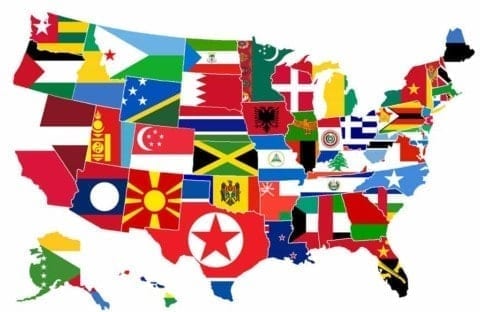 A Melting Pot is defined by Merriam Webster as “a place where a variety of races, cultures, or individuals assimilate into a cohesive whole” (“Melting Pot”), but over the lengthening time period that this country has existed and has endured, our melting pot has become more known as a part of all of us, rather than all of us being a part of the melting pot. By calling yourself an American, you do not identify as a specific race, gender, or religion, but rather a mix of all of them. We all put our own aspects into this melting pot of a country, and we all draw our identities from these aspects, which grow in size each year. Although it took quite a while for diversity to be accepted as a value of the United States, step by step our citizens made progress towards the multicultural society that we live in today. We have come quite a long way since the foundation of America, since the abolition of slavery, since the Jim Crow Laws and the world renowned Supreme Court Case Brown v. Board of Education, but despite all of the progress that we’ve made in accepting diversity, there is still quite a ways left to go before everyone can identify our Melting Pot as a part of them. Some may say that we will never see full equality in our lifetime, but these people have forgotten the epitome of the country that they live in, because after all, this is America, and America has come to mean defying all odds and completing the impossible, providing opportunities where no one has seen them before – and where there are opportunities, there will always be hope for the future.

In order to fully understand the roots of our Melting Pot of a society, one must go back to the foundation of the United States and how our culture was originally intended to be. Often times people don’t hear many negative thoughts about our founding fathers and tend to believe that these people had no flaws. However, each and every one of them did in fact create the United States on a contradiction laid out in our Declaration of Independence by proclaiming “We hold these truths to be self-evident; that all men are created equal” (US 1776), but if in fact all men were created equal (like Thomas Jefferson so profoundly wrote), then we would not have experienced the enslavement of Africans and African Americans up until the Civil War and their specific segregation well into the 20th century. It’s preposterous to think that so many of these men fought in the Revolutionary War to gain independence for white people who would not reciprocate the action and emancipate slaves, yet at at the same time, it’s remarkable to acknowledge just how far we have come in so little time. One of our nation’s most famous civil rights activist of all time – Malcolm X – grew up in a world where discrimination and racism was the status quo. His father was lynched when he was 6 years old. His mother was removed from his family for no justifiable reason whatsoever. He was one of the smartest children in his entire school, yet he was told that he would never go anywhere in life because he was black. Ilyasah Shabazz, his daughter, wrote X: A Novel (told in the first person of Malcolm X), which specifically described to readers all of these acts of racism that whites committed against Malcolm and his family. In one part of the book, Malcolm travels to Harlem – a prominent sight of black pride and the civil rights movement in the 20th century – and watches a performance by Billie Holiday, a jazz singer who expressed her desire for equality through song. One of the pieces (“Strange Fruit”) sung by Billie during this performance described the horrors of African American lynchings. After the performance, Shabazz wrote about Malcolm reflecting on a lynching that he had seen on a train ride to Boston when he was young. He said that the performance “evokes, really evokes, the lynched body I saw. The lifeless bodies Billie sang about. Hanging there, blowing in the wind. The song never says why they were lynched. There is no why. What did they do? Blackness is reason enough.” (Shabazz 222). This horrific perspective that being a different color justified being killed for no reason makes us think that these events must have occurred hundreds of years ago, but really, this happened in 1942. 75 short years ago, which is less than the average life expectancy, it was justified for black people to be hanged for being black. In 75 years, this country has completely switched the direction in which it was headed and turned itself into a nation where diversity is celebrated, where lines of descent are honored, and where all people are giving equal rights under the law regardless of their race. 75 years ago, there were likely very few people who thought that in the year 2008 an African American president would be elected, and even though it seems unlikely that in 75 years from now racism might be a word of the past, anything is possible in a country where people can speak their minds freely, anything is possible when someone believes it can happen, anything is possible in a nation that was built on dreams, in a nation where dreams do come true.

America is a unique country in many forms. It was one of the very first democracies that this world has ever seen, it was the first nation to defeat Great Britain in a war, and it was the first nation to be established on the principle of white privilege but later shift to finding value in the vast diversity of the population. In the article “America: History’s Exception” by Victor Davis Hanson, the author took a very interesting perspective that America has thrived most when it controlled and documented immigration and Americans and immigrants blended their values together. This blending of cultures was essentially what started our melting pot. To have many different cultures in one nation does not make it a melting pot, but rather when these cultures interact with each other and adopt different parts of one another’s beliefs and ideals. However, this was not how the country was originally created, because at first, we valued exterior appearances above interior thoughts. We began to judge people before we got the chance to get to know their culture, but as more and more minority cultures gained influence, “the United States steadily evolved to define Americans by their shared values, not by their superficial appearance” (Hanson). This policy first started to really take off after World War I during the Harlem Renaissance, which was “a blossoming (c. 1918-37) of African American culture, particularly in the creative arts, and the most influential movement in African American literary history.” (Hutchinson). The Harlem Renaissance was really the first time that Americans began to recognize African culture, and the movement became so popular that it has stayed a part of our culture ever since. In X: a Novel, Malcolm X is influenced quite a bit by this increase in African American pride and culture, especially when he first arrives in Boston and is immediately drawn to Roxbury, a town where music, clothes, and talk from the Harlem Renaissance were all present (Shabazz 86). Without this influence, Malcolm would not have gained the true sense of identity that he was able to with all of his exposure to his culture, and if America never began to accept foreign cultures, we would still be an entire nation of the same. This nation has always been adaptive and has never failed to change with new times, and although our Melting Pot did not exist at the start of the United States, it did not take very long for whites to begin adopting foreign cultures, and as soon as that took hold, we were left with hundreds of different values and beliefs that we all hold close to us today, because they are all part of the Melting Pot, and the Melting Pot is part of all of us.

America has been dubbed many names and has been given many themes that represent the country, but in order to go to the center of our values as Americans, we have to analyze the entire population as a whole. Coming from Michigan, I am used to hearing every single winter that no two snowflakes are the same, and this cliché can in turn be applied to each and every citizen of this country. No two Americans are the same, our views clash and we say bitter things about each other, we disagree on current events that our critical to our country, and we follow many various cultures, many of which have no similarities at all. We are each our own snowflake, holding our values that define who we are close to our hearts, but just like every snowstorm that hits Michigan, the end result is a beautiful sight of all white, a stunning blend of every single difference of every single snowflake coming together to form something so identical that no one would never have guessed that no part of it was the same. This is our Melting Pot. Each and every one of us brings to the table something different from the other, each American contributes to society in a unique way, and when we all contribute in different ways, we come together and we form a society united by our differences, a society and a nation that can not be broken because of all the bonds that we have between ourselves. Diversity isn’t a dividing factor amongst Americans, diversity brings us together and makes us part of this Melting Pot. Diversity will always be a factor of this nation as it continues to grow and gain new values, but at the center of all of those values will forever be these things: a country united by its differences, a Melting Pot formed by all of these differences, and one large population that this world renowned Melting Pot is a part of.