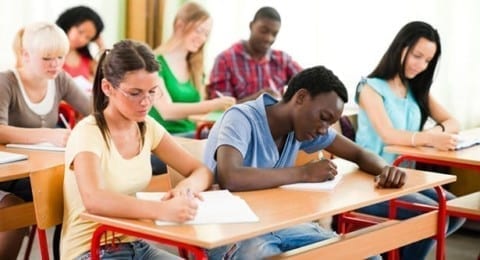 As an American, I feel grateful and blessed to be living in a country of freedom and opportunity. Many people around the world look at the United States as a superior country. We have the five largest companies in the world. We have the most valuable brands across the world. We are number one in natural gas production (Wile). We might not be the best at everything, as one would expect, but we wouldn’t be wrong if we said we are a successful and fortunate country. However, will we still be this successful in the future? That answers lies in the hands of our children today. If we want to continue being one of the most successful countries in the world, we must start with making sure our children are being educated well and ensuring that they know how to best care for this country.

The United States does not even rank in the top ten when it comes to education (DeSilver). We are home to some of the brightest people in the world yet an average American is lacking when it comes to education. So what is the problem? The problem isn’t that only a small group of students strive to do their best but rather that only a small group of students are able to face the pressure of multiple activities and succeed. This is different to the situation in many other countries. Although some countries pressure their youth to work hard and burden them with hours of homework, the students in these countries are still succeeding (Klein). How is that possible? Well something people don’t realize when we see these facts is how Americans value other things besides just education. The students in those other countries are only pressured to focus on one thing: their education. However, the students in America are pressured to participate in school clubs, participate in sports, volunteer their time, work and raise money for their family, and all while doing well in school. According to the United States Census Bureau, around six out of ten students participate in at least one extracurricular activity (Bureau). Students will spend their time and energy on these extracurriculars and will feel stressed out when it comes time to study for school.  All these activities take a poll on the students and their stress level which isn’t going to help anyone.

The crazy amount of responsibility we place on teenagers is what makes America one of the most successful countries in the world while at the same time preventing it from ranking high on the education spectrum. American children face enormous amounts of responsibility which helps them prepare for life but fails to help them succeed in life. So it all comes down to what we should focus on more? Should we focus on how our children perform academically or the life skills that they learn along the way? Our country tries to focus on both which is the way it should be but the system seems to be failing. So how do we fix this problem? As a country, we should be working on trying to minimize other factors of stress for our children. For American children, financial problems play a major role in stressing children or taking their time. According to a study done in Concordia University in Portland, Oregon, around one fourth of students work a part time job (Blake). Many children in low income families feel the need to work because their parents aren’t working hard enough to raise their family. This takes away their time that they should be spent studying or even time for them to relax and recharge. We should be working on making sure families get food on their table or even making college more accessible to teenagers. According to the Edward Jones Poll, 83% of Americans can’t afford college (Levaux). Many children don’t have the money to go to college so they forget their education and try to find a job just to make it in this world. We should be working on helping children financially to accomplish goals they they believe they otherwise couldn’t.

Another stress inducing problem our children face is the grading system. The thing parents, teachers, and colleges value the most are children’s grades. This leads children to cheat or put little effort into learning the material and memorizing it instead. These kids are creative and will find ways to do well in school without learning the information their teachers are trying to teach them. Society should focus on helping children understand that grades aren’t everything and that what matters is what you learn in school. According to Catherine Rampell, opinion writer for Washington Post, letter grades are negatively affecting children and causing them to stress out over things they shouldn’t be stressing out about (Rampell). If we emphasize their growth in their education rather than comparing them to their peers, they will feel less stressed and will be inclined to doing better in school rather than simply completing the work to get an A.

Despite the problems we see in our education system, many US citizens believe our education system is perfectly fine. Our system isn’t horrible but it isn’t doing its best either. Many American schools use the “teach and test” method where teachers simply teach students material and then test them over what they learned. Although this sounds reasonable, it isn’t very effective. According to Art Kohn, who has a Ph.D. in cognitive science at Duke University, people forget about 90% of the information they have learned within a week (Kohn). This prevents students from doing well on tests over long chapters or standardized tests. Our school system is also damaging our kids’ interest in learning and is preventing them from learning successfully. The article by Peter Gray from Reader’s Digest claims that for children to learn better, they should be given freedom and should be allowed to explore resources to obtain information rather than restricting their freedom, teaching them material, and then testing them on it (Gray). Most children are naturally curious and will try to find what they want to learn but by forcing these children to learn material, we take away their curiosity as well as interest in what they are learning.

If we as a country start making a change by working harder so our kids wouldn’t have to and creating a more peaceful environment for them, more kids would have the opportunity to grow and succeed in life, which will reflect back on our country and how successful we will be in the future. We need to focus on teaching children in ways that will help them understand information and help them grow in life. With a simple changes in our community and education system, in no time, our country could be booming on the charts and creating a better name for ourselves.

DeSilver, Drew. “U.S. Students’ Academic Achievement Still Lags That of Their Peers in Many Other Countries.” Pew Research Center, 15 Feb. 2017.

Gray, Peter, and from Salon.com. “Is the American School System Damaging Our Kids?” Reader’s Digest, 19 Apr. 2017.

Klein, Rebecca. “This Is How Much Homework Teens Do Around The World.” The Huffington Post, TheHuffingtonPost.com, 17 Dec. 2014.

Rampell, Catherine. “Opinion | Why Getting Rid of Grades Would Help Rich Students – and Hurt Poor Ones.” The Washington Post, WP Company, 11 May 2017.

Hi Srihita,
I love your piece! It is a very well developed argument, and I definitely agree with your position. The dual responsibilities and grading system is as flawed as you say. In my own argument, I explored fixing the education system by promoting fine arts, and I loved seeing a different view.
My only comments would be to make sure your paragraphs are not indented in an online space like Youth Voices. I am also a little confused when you say that the enormous responsibility placed on students’ shoulders helps them prepare for life but does not help them succeed in life, and was hoping to find some clarity there.
Thank you for sharing! It’s wonderful writing.
-Adelle