The 2 Anthems of the NFL

Home The 2 Anthems of the NFL 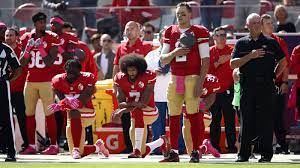 In the article, “The NFL and the Anthem ” (BTW) we see that the National Football League (NFL) implemented another pre-game anthem “Lift Every Voice and Sing” to their traditional national anthem “The Star-Spangled Banner ”. This addition as a result of Kolin Kaepernick’s silent protest where he knelt during the National Anthem while players & fans stood. The motive behind his silent protest was racial inequities in the United States and police violence against African American suspects. This quickly became a highly debated topic with many negative public reactions, but after a few disagreements and a few seasons the NFL made the decision to play “Lift Every Voice and Sing” along with “The Star-Spangled Banner.” The anthem, “Lift Every Voice and Sing”  was intended to unify the African American community in the fight for equality and justice. Kapernick felt that this was still a major ongoing issue, in which he decided to use his platform, live television, to protest against these injustices.

I believe Kolin Kaperinick had pure intentions when he silently protested, but I also believe that social issues, political issues, or activism should be left off the field. The football field is intended for football, therefore football shall be played. No one goes to a football game hoping to hear about social or political issues, people go to a football game to have a good time. I understand that people like Kaepernick are athletes with a lot of fame and a platform, but why not wait till before or after the game. You say what you’re going to say, before or after, then you go and perform on the field, it’s as simple as that.

My question to you is, is it ok for Athletes or Celebrities to protest against social or political issues when they are on the “Job”?