Temple Grandin: A Godsend To Cows 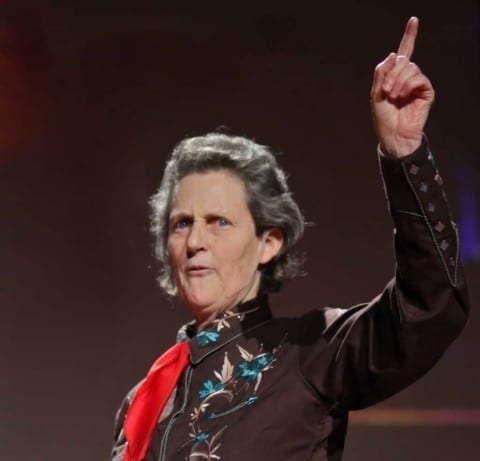 You probably eat cheeseburgers three times a week (which is way more than you should) but have you ever stopped and wondered where it came from? Your cheeseburgers come from cows across the country. Over the course of American history, the life of these cows has gotten better and better. Why should you care about the cows who are going to die? Well, as Temple Grandin once explained, for the same reason that you care about elders who are going to die because they are still alive. But now you’re wondering who Temple Grandin is?

Temple Grandin is an autistic animal activist who has spent her life improving the lives of these cows. Temple Grandin was born in the year 1947 before the diagnosis of autism entered the public mind. She grew up in a house in Boston with a father who thought she was a retard and a mother who didn’t agree. After seeing a psychologist she was inaccurately diagnosed with brain damage. (Because brain scans and autism didn’t exist yet) Her mother gave her a constant speech tutoring from a therapist as well as a nanny who used picture training to help her learn manners.

At the age of 4, she was sent to a school that went up to sixth grade. (today that would be eighth) She was warmly accepted into the small class of first grade and went all the way up to six in that school making friends along the way. Everything was perfectly fine until she had to go to the horrors of high school.

For high school, she went to the Beaver Country Day School. There at her new school, the inevitable fate of anyone different caught up with her. In other words, she was bullied and bullied hard. The climax of this happened halfway through the year when a girl walking down the hallway called her a retard. Temple responded by throwing her big heavy history textbook at her face and then calmly walking away. She was expelled four days later.

So, in the middle of the school year, she was sent to another school called Mountain Country School in the middle of absolutely nowhere AKA New Hampshire. She stayed there until it was time to head off to college. She fared pretty well at the school making friends and conducting experiments. She also made one very important discovery that would impact her life forever, the squeeze machine.

The squeeze machine was one of Temple’s first inventions from a long line of inventions to help cows. However, this invention was meant to help her. She realized that by putting her head through a slot between two boards and putting the boards together to apply pressure which calmed her down, as well as some other people. The invention was the derived from a contraption used to keep cows in place while being medically treated. She also wrote books about autism and other such things to help spread knowledge and coping strategies for autism.

And now the Cows

As you may have gathered by now Temple Grandin worked in engineering ranches. She figured out why the cows wouldn’t go certain places. For instance, if they need to be brought into a room and there was a swinging chain in the room that didn’t seem to belong there, the cow’s wouldn’t enter. If the chain was removed, they would enter. The same thing applied to rustling fabric and even light from colored windows.

In the 1970s an epidemic struck the cattle industry, an epidemic of Scabies. Scabies is a skin rash caused by a family of mites burning through your flesh and laying eggs inside of your skin, causing a rash and an awful itch. Once the eggs hatch and break free from the panic zone inside your skin the disease spreads. (Scabies is also common amongst humans)

So, to solve this problem, Temple Grandin went to her drawing board and devised a contraption that would work. She visualized the entire thing in her mind as well as, how the cows we go through it. She was absolutely Confident that the machine would work and it didn’t. The problem wasn’t the design, it was the Cowboys who removed grooves in the metal underneath the cleaning fluid. Because of the lack of these grooves, the cow’s that entered the machine would drown. The problem was solved, the machine worked fine, and nobody messed with Temple’s designs again. Actually, they did but that’s important.

Just when everyone thought everything was just fine and dandy, somebody brought the attention of Temple Grandin to the kosher slaughterhouses. The Jewish law of kosher requires that among other things the animals must be killed in a non-painless way by a specialized guy with a very big knife.

However, these places were barely observing the law. To put it lightly, cows were screaming, people were screaming, the walls weren’t very soundproofed and none of it was painted blue.

Upon seeing these atrocities, Temple drafted the plans for it be fixed and then gave it to the guy for free. She cared that much about the cows.

Eventually, she succeeded, and the place fell under new management. The new management decided to fix up the place, add more cushions, prevents bones from breaking and kill even more cows. At least the screaming was reduced to basically nothing.

Now Temple Grandin lives in a relatively big house in Colorado with all of her accomplishments. She even has a wooden horse given to her by the actress Claire Danes who played her in her very own movie. Oh and for those were wondering she is not a vegetarian or vegan.

The information used in this text it’s from the audiobook version of: “Temple Grandin: How the Girl Who Loved Cows Embraced Autism and Changed the World,” by Sy Montgomery.

I learned something new about Temple today! Thank you!

Temple grandin achieved a lot of accomplishments, despite her rough childhood. She would not let it get to her. Nice details!