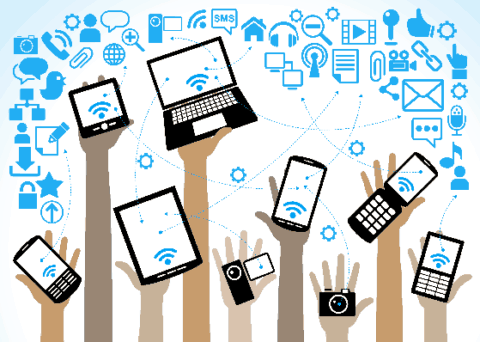 George Orwell’s dystopian classic, 1984, seems near prophetic when looking back on the work today. Orwell predicts the increase of surveillance and the decline of personal privacy. However, there is one area in which Orwell misses the mark almost entirely–the use of technology. Yes, Orwell predicted that new technologies would be used to surveil citizens and devices like Amazon’s Alexa seem to support this idea. But Orwell never could have imagined that people would trample over each other to grab one on Black Friday. Moreover, Orwell never could have imagined that people, especially teens, would be so desperate to be constantly connected to their phones. Orwell’s characters search unsuccessfully for anywhere that is unconnected–anywhere that they can be really alone. Today kids ignore family, school, and other responsibilities simply so that they can stay connected. They do not want to turn off their devices; they want to keep them on indefinitely.

According to one study, “72% of teens feel pressured to respond immediately to texts, notifications, and social media messaging.” In this way, teens have become slaves to their phones. While this may seem like just a harmless “phase” to most, there are real consequences for many teens who are unable to put their phones down. The most commonly identified problem is that teens do not pay attention to their family or friends, but another consequence of telephone “addiction” is that many teens open themselves up to more outside influences than they were exposed to in previous decades. Teens willingness to accept information simply because it is on the internet–be that a blog or a government website–can lead to false beliefs about themselves, others, and their own country. There is even a medical consequence of extreme telephone use. One Swiss study finds that people who use their phone constantly have worse memories than those who use their phone in more moderate doses. This is because the minute levels of radiation that a phone emits are slowly killing brain cells and this damages a person’s memory.

After learning about some of the dangers that come with the constant use of cell phones, one logical response is to wish the world would just go back to the time before the internet. However, technology is used in many more settings than personal life and many fields have benefitted greatly from technological advancements. Businesses use technology to make their products more accessible and efficient for consumers. Lives are saved each day when someone calls 9-1-1 to report an injury. Classrooms around the world use computers and projectors to help more kids learn more quickly. None of these uses for technology are what scientists are thinking of when they say that people are “addicted” to technology. So what is the difference? The nature of the relationship with technology. For professionals and in many emergencies, the use of technology is necessary and the relationship is utilitarian.

The problem is when people feel a compulsion to check their phones constantly. These are the people who are missing out on life experiences, being influenced by every opinion on the internet, and harming their memories. So how does one get back to a utilitarian relationship with technology? With a smartphone in every hand and a billboard on every corner, the idea of going “cold turkey” on technology is essentially impossible. For those who have a clinical addiction to technology, there are facilities that treat young people who are addicted to any aspect of technology–the Internet, video games, social media and more. However, for many, this option would be rather extreme as internet addiction is not even considered a mental disorder, yet. For most people, a “digital detox” could help them to recognize the detrimental role that their technology addiction is playing in their life. The government also helps to create laws that limit technology use when it poses a real danger to others such as texting while driving. Still, there are even simpler solutions that everyone can implement to create a more utilitarian relationship with their beloved devices. The first step is always to asses the problem in a personal way and set a goal. For some people, the goal may be not to use their phone during family time or simply to cut back on total phone use per day. One very easy solution is to use the screen time settings on most phones to set a reasonable limit for phone use each day. Though this does require quite a bit of self-control because people must resist the temptation to simply change the limit when the timer goes off.

These solutions are simple but they require initiative. Some may say that no one would voluntarily cut back on phone use and for many teenagers, this may very well be true. However, these days it is not just teenagers who are addicted to the internet or their cell phones. From tiny toddlers to the elderly, more and more people are beginning to have a hard time putting the phone/tablet/computer down. This problem need not become more of an epidemic than it already is as there are easy ways for everyone to protect their relationships, ideas, and brain. These methods of detox or limitation can be imposed upon younger children and even teens, but they work best when they come out of a personal initiative. Still, Orwell’s prediction may never come to fruition–there may never be a society that despises technology. But Orwell does not have to be completely wrong. We can create spaces and times to escape from technology. So if you will not put down your phone for yourself, put it down for the glory of Orwell.