Tech Companies And Americans Distrust of Them

Home Tech Companies And Americans Distrust of Them 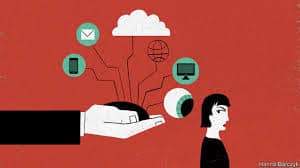 As we all know, we are getting closer to have some advances of technology. In which we get amazed and trust the tech companies that make them. However, over the past years we became aware of some problems that the tech companies are doing without acknowledgement. And that some of them are spying on what we are doing by using their products which they are disrespecting our privacy.

There doing this to make sure to see if there’s a person trying something illegal so to make sure the safety of the people. In which the government made an agency that is called the National Security Agency (also pronounce the N.S.A) which they have a spying record that has been under scrutiny as of late. However the agency is not the only one that is handing information it also include other social media, search engines, and other tech companies. That is one of the reasons why the Americans distrust on them. Another is of how the tech companies present a new product that they made and say what is true what their product has, but actually the people sometimes see that there are somethings that there are not true of their product that aren’t true, in other words they lie so that they can gain trust for the people that are consumers. From all this there are some tech companies that have a hard time gaining trust for their customers. This has been proven by a research from the Pew Research Center; four years ago, they say, some 71 percent of Americans thought that tech companies had a positive impact on the U.S.; after that the numbers has now decreased to 50 percent. Which in that same period, negative views of tech firms has climbed from 17 percent to 33 percent. From this it included “a political element to all this. ‘The gap between Democrats and Republicans is a relatively modest when it comes to technology companies,’ Pew reports.”

In conclusion, I see that the greatest tech companies that were around longer have given the distrust of Americans. In my opinion I see on what they were trying to make sure that the information of the person that looking on the web, supports as evidence or a way to track them down. Also that helps the tech companies to gain more wealth for the companies, but this cause a lot of consequences for future companies to gain trust and to be careful on what there adding on their product.

I agree with you. Apart from tech companies spying on us, I have also heard about these companies also sell our information. And yes, it is those companies that we trust the most that invade our privacy and trust by spying on us. It is crazy that we see information about ourselves when we search our names up. I think that the internet is becoming less private day by day. Thank you for your writing, I enjoyed reading it.