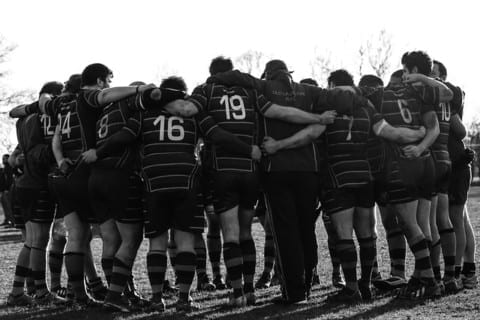 In my research so far, I have found that team cohesion is related to leadership and coaching style. This source, however, mentions a couple problems when it comes to studies researching cohesion. Typically, studies conducted that are used to show the impact of team cohesion within sports are not conducted in sports situations, only consider cohesion in relation to success, collect data only twice, do not consider situational differences between sports, and do not consider initial levels of cohesion. With this in mind, This specific study made sure to take all these factors into account. The GEQ and LLS were used to measure cohesion with success measured by wins and losses of teams. Eighteen high school athletic teams including nine soccer teams and five basketball teams were analyzed in this study.

Three key points were made before conducting the study. The first is that situational differences between sports influence the impact of cohesion on a team’s performance. For example, sports in which members are highly dependent on each other will need more cohesion than others to be more successful. This being said, soccer teams require more cohesion than basketball teams because two or three good players on a basketball team can carry that team. The second is that team cohesion changes throughout time and must be continuously monitored because it fluctuates throughout a season. For this reason, cohesion was monitored multiple times throughout the season. The final point is that antecedents influence cohesion. Antecedents include leadership, situational, personal, and team factors. When collecting the final data set, group and individual consequences which must both be considered.

The methods of measurement in addition to wins and losses are the Leadership Scale for Sport and the Group Environment Questionnaire. The Leadership Scale for Sport has three parts including the athlete’s coaching preference, the coach’s idea of their own ability, and the athlete’s opinion of the coach’s ability. The Group Environment Questionnaire is quantified through the antecedents and consequences which were discussed previously.

This study found that leadership and cohesion are strongly related, it is important to consider the three types of leadership through the Multidimensional Model of Leadership: required, perderred, and actual. Required leadership is when a leader does what they are asked or required to do. Preferred leadership is what members would like to see in their leaders. Actual leadership is dependent on a leader’s characteristics such as personality, experience, and skill. Typically, leaders who exhibit preferred and actual leadership contribute most to team cohesion. High levels of positive feedback, training, and instruction lead to higher levels of task and social cohesion. Positive feedback and social support include motivational tendencies and concern for personal needs. Finally, the democratic and autocratic behavior focus on the social process of decision making. Training and instruction include behaviors towards task and accomplishment. This study also disproved their hypothesis that cohesion would fluctuate a lot during the season. While cohesion does fluctuate, the extent of the fluctuation was not as extreme as they predicted. This being said, the antecedents of team cohesion are very important.

Olivia, I really enjoyed this post and I think you have a very interesting topic. This study did a good job at looking at what other studies did and then improving. I especially liked when you talked about how “high levels of positive feedback, training, and instruction lead to higher levels of task and social cohesion.” Here is an article you might find interesting: https://www.nytimes.com/guides/business/manage-a-successful-team. I look forward to learning more about your project.