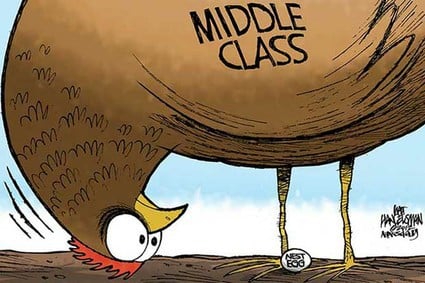 Most Americans say they are proud to pay their taxes. In an independent poll conducted last year for the I.R.S. Oversight Board, 96 percent of the respondents agreed with the statement ”It is every American’s civic duty to pay their fair share of taxes,” while 93 percent agreed that everyone ”who cheats on their taxes should be held accountable.” On the other hand, when asked what influences their decision to report and pay taxes honestly, 62 percent answered ”fear of an audit,” while 68 percent said it was the fact that their income was already being reported to the I.R.S. by third parties. For all the civic duty floating around, it would seem that most compliance is determined by good old-fashioned incentives.

Tax inequality has grown over the years and has become a big problem. The top 1% are not contributing to the economy. Based on the economist’s “That is because of a change in policy direction. Across the West, taxes on higher incomes have generally fallen. This could be for a number of reasons, the IMF says. The tax take from high earners could have become more “elastic” (ie, sensitive to rate changes); in a mobile world, the elite will move countries to reduce their tax bills. But there is no sign that elasticity has increased in recent decades. A second possibility, easily dismissed, is that the share of income taken by the rich might have fallen; it has, of course, increased. A third option is that society reached a consensus that tax rates needed to be cut to help the rich. In fact, surveys show that people are more in favour of redistributive policies than they were in the 1980s.”

For the Future of America, we need everyone to fairly pay their taxes. Taxes are being taken from many that are impoverished, those that need that money to provide for their families and those that are trying to get their lives on the right path. Taxes should be taken more from people that are able to afford giving up that much money. Taxes over the years has greatly decreased and of today, they are as low as 1.3% taken from the wealthy. If we are able to raise the bars as high as 50% percent or even more for the top 1% then our economy would greatly benefit from these outcomes. Yes the rich will lose a great percent of their money but at the same time it will not hurt them in any way,they hold corporations that control a lot of how America runs and In doing this I also think they would not have to pay additional taxes for the companies that they own.

“Narrowing of the tax base is partly the natural consequence of widening inequality. Since an ever bigger share of overall income goes to the highest earners, and since income taxes are progressive (with a higher rate levied at higher income), it is inevitable–and appropriate–that the most affluent should pay a growing share of the overall tax take. Well-intentioned efforts to encourage work among poorer folk have also concentrated the pool of taxpayers. America’s Earned Income Tax Credit (EITC), which tops up the earnings of the least-skilled, is one of its biggest poverty-fighting schemes. Thanks to the EITC, millions get a cheque from Uncle Sam rather than paying income tax.said” by the economists.

There are many ways that we can reduce taxes without taxes more poor people, based on an article in the Observer, “The effects of taxation on income distribution needs to be seen in the context of the trade-offs between growth and equity, and this means looking at the overall effects of any reform on the fiscal regime as a whole, and not just at whether individual taxes are progressive or regressive. This is because the distribution of disposable incomes depends on both taxes and benefits. Raising indirect taxes, for instance, is often regressive where these taxes fall on the consumption of goods and services that make up a larger share of the budgets of poorer than richer households. But the overall impact of a fiscal reform can still be progressive if these effects are offset by other tax and benefit changes. Income-related benefits, for example, are a much more efficient way of increasing the disposable income of poorer households than reduced rates of VAT.”

I found this to be a very interesting post. Thank you for sharing, tax inequality has been a issue for many years. with the imbalance of the rich paying less and the middle class having to pay more. There has been many discussion on whether that may change or not. I know with the knew presidential office in today has managed to reform that balance to make it become more of a equilibrium balance. Below I have left a link how president Trump plans to help change the tax polls and make it more of a balance. thank you for your post Fredrick.

Hi Fred,
I found this to be a very informative and detailed article on the tax inequality. I thought your use of quotes was really good and flowed very well with your article. I look forward to read more of your posts on this topic.