Tales of the Afterlife: The Story of Two Brothers by Nafiz Labib

Home Tales of the Afterlife: The Story of Two Brothers by Nafiz Labib 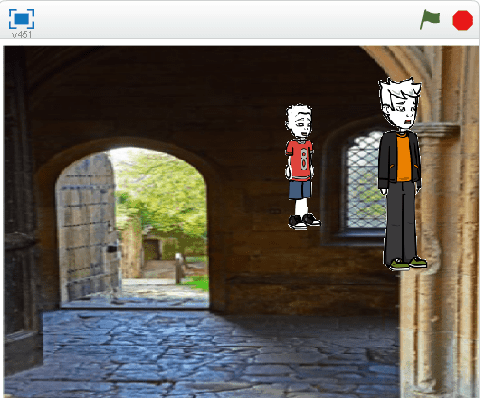 Hello, everyone, my name is Nafiz Labib, and this is my post for an animation I just created. It’s about two young boys, who are brothers, and they are set in a timeline where there is an apocalyptic future and they have to survive. I don’t want to spoil it,now, heheh, so copy this website and paste it to your URL:

Now, about my process. First, I brainstormed up some ideas about what my next animation was going to be about. After I did that, I made up a plan of how my animation was going to go. It was to be divided into three acts: Introduction, Climax, and Conclusion/Resolution.   I made a script for the animation, and I revised and edited until it was as good as it could be. Below this is my script.

The animation starts as the first setting, the bedroom of some house in New York, comes to be seen. The curtains draw up….

[Jake] is sitting down on the bed, reading some books. KNOCK, KNOCK, goes on the door.

[Jake] Yeah…I’m just reading some books to pass some time.

[Jake] After all, now, life is getting pretty boring.

[Afton] I feel you. (yells) I want to kick some zombie butt!

[Afton] That could be bad though.

[Afton] (looks outside window) There aren’t any zombies in sight, and I don’t hear anything.

[Jake] You can go check. I’m too scared to go out there.

[Afton] Oh, come on! You know that even though I’m tough, I can’t go against the likes of those zombies all by myself.

[Jake] Fiiiine. Just let me set up my room, and then we can go outside.

[Afton] All right, then. I’ll be waiting outside for you. Better come fast.

Afton opens the door. Out shines a ray of light…

[Afton] Hmmmmm…where could those zombies be?

Jake steps outside through the door.

[Jake] What happened? Did you find anything?

[Afton] Yup. I found this leaf that seems like it has zombie stuff on it.

[Jake] Let me see that. (examines leaf) This is fresh. Either the zombies were here, or some human was recently infected.

[Afton] I wish we had developed a cure. Then we wouldn’t have to put those monsters out of their misery, and we could get all the humans back, and we could go back to normal life.

[Jake] I wish we had, but since we don’t, it’s either kill or be killed. We don’t want them to get to us, so we have to do everything we can to survive.

[Afton] Okay, then. Let’s go and ready the defenses.

Suddenly, Afton and Jake hear rustling by the bushes.

Afton moves closer towards the bushes.

Out pops a gang of zombies!

What will happen to our brave and young heroes now? Find out next time!

END OF ACT I

Last time our heroes were seen, they were surveying the outside when suddenly, a gang of zombies appeared in front of them! What will happen to them now?

[Afton] (shouts) Go back inside! I’ll protect for now!

[Jake] No! This is a two-man job! We have to do this together.

[Afton] (grabs shovel) If you want to, grab something to fight them off with!

[Jake] (grabs bat and hose) Try to scare them! I’ll use the hose to make them run off!

The zombies start to back away.

[Jake] (pumps fist in air) Yes! We won the battle.

Suddenly, a whole horde of zombies pop up!

Afton and Jake go through the door, running madly.

What will happen to our two heroes as their fate is about to be sealed? Find out next time!

Last time our heroes were seen, they had arrived to the climax of their situation! There were zombies everywhere, all around them. They have taken shelter, but will that be enough? Find out now!

The play starts from the last part. Curtains rise…

[Afton] Now, we ready the defenses for the encounter between us and those zombies.

[Afton] This is no time for jokes! Hurry up and get going!

Afton and Jake run to every corner of the house, readying their defenses with walls of metal and wood, and readying weapons to protect them.

[Jake] We should also stock up on food and liquids.

Afton and Jake scrounge around the hose for as much food and liquid (drinkable) they can get.

[Afton] Well, we found all we could find. [looks at humongous pile] Although this is good enough.

[Jake] Do you think we have to escape and haul all this with us, or should we stay?

[Afton and Jake] What was that?!

As the two boys look at the door, it keeps on emitting banging noises. Suddenly, the door is breached! Somehow, the zombies were able to go past the barricades!

Afton runs to every room of the house without getting himself himself damaged as fast as he can. But Jake isn’t there. Finally, he arrives at the bedroom they were originally at.. Some zombies are surrounding something… when they see Afton, they separate, revealing…Jake! He has finally turned into a zombie!

[Afton] Why, Jake, why??? We could have survived all this!

Stricken with grief, he decides what he wants to do next. He walks slowly towards the direction of the door, and goes out, walking to the driveway, where most of the zombies were.

[Afton] I have no more of a reason to live! Take me, so that I can be back with my brother in the same way!

Afton spreads out his arms in the air, and the zombies surround him. A while later, they separate, they reveal a zombified Afton. The zombified brothers, Jake and Afton, walk towards each other, not talking, but show emotion within their faces.

So ends the stories of two brothers, working together to survive in a barren world full of monsters. It may have been gruesome, but they died, reunited with each other later on.

Next, I made a storyboard layout based on the script I had made. After this, I started working on my animation. After I finished each act in my animation, I revised it and edited it, and then I moved on to the next act. When it was done, I did one big revision and edit until it was very nice. Then I shared it to the Scratch community, and now, well, I’m sharing it to you guys. So, I hoped you all liked this discussion, and if you have a Scratch account, give it a like! Bye now!   ( ͡° ͜ʖ ͡°)