Taking The Knee For What you Believe In

Home Taking The Knee For What you Believe In 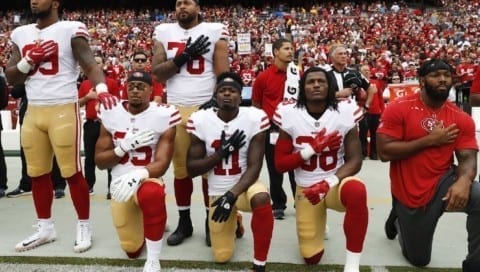 Protesting by taking a knee is necessary. Some players feel like they aren’t being heard , so they decided to take the knee during the National Anthem . You should be able to protest how you want to without anybody judging you . Not standing for the National Anthem is a peaceful protest & it’s not harming anyone. I know some people feel disrespected but the football players really don’t mean any disrespect , they just want to be heard.

Our president makes things no better , he honestly doesn’t think before he speaks. For him to be the president he says a lot of things that the president should not say. A lot of people are making to much out of this situation , I honestly think this is a distraction from the government . So we won’t pay attention to the serious things that is happening in our country.

Very interesting topic, Denise. I wholeheartedly agree with what you are saying. It is freedom of speech to have the ability to take a knee, and stand up for something a person strongly believes in. In addition, I believe it is very smart of the NFL Players to use their influence and platform in order to make a difference. I especially enjoyed what you said about President Trump making the Take a Knee movement “a distraction from the government.” If you would like to hear another opinion about President Trump’s distractions, you should read this article:https://www.theguardian.com/sport/2017/sep/30/nfl-anthem-protest-flag-waving-colin-kaepernick. I look forward to reading more on this topic from you in the future.

Denise I found your points very interesting and I agree with you. The way the players unite and conduct themselves is very admirable. They have every right to take a knee, and by doing it peacefully are teaching young kids how to protest for what they believe in. President Trump comments on the issue I believe were out of place. The issue is police brutality not football. I think we need to look at why the players are doing this, and not just how they are doing it.