Taking a Stand for Injustice

Home Taking a Stand for Injustice 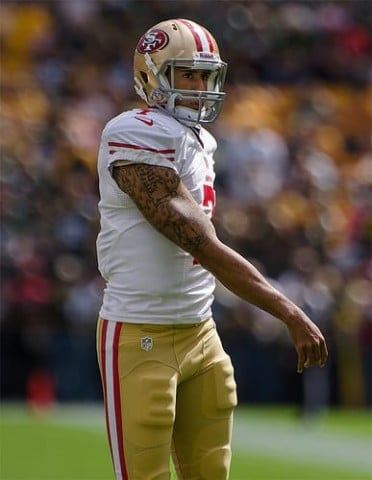 In the world we are in today the ability to peacefully protest is one of the most important tools you can have. It is the main tool that any person that resides in our country should be able to use at any point without any push back. While I see this as a necessary skill for every person to have there are people that feel people should just take what they are given, no matter the circumstances.

In the recent years a professional football player by the name of Colin Kaepernick decided to voice his personal opinion on the reoccurring events of police brutality toward unarmed black men in our country. He didn’t do this by saying anything per say, but he set an example for many others to follow. In the beginning of his silent protest he decided to sit during the national anthem because he felt this song was not representing what America was supposed to be about. Such as our first amendment right to freedom of speech and the pursuit of happiness. His actions were not recognized until a veteran by the name of Nate Boyer wrote Kaepernick asking him to find a different way to show his displeasure towards the government’s lack of action. After receiving this letter Kaepernick decided to set up a meeting with Mr. Boyer to discuss both of their feelings and how he can do right by both the military and the black people that are being wrongfully treated. They came up the idea of kneeling instead of sitting. They decided on this because in the military when a soldier dies his platoon takes a knee in front of the fallen soldiers family and presents them with a flag. This kneeling is shown as a sign of respect and support. (Yoder para 5)

Though Boyer was very excited and happy with Kaepernick’s decision to join his teammates and take a knee there are many who find his antics rude, disrespectful, and distasteful. Many of these people would say that the reason we stand for the anthem is to respect those who have given their lives and continue to give their lives to protect not only our freedoms, but he freedoms of other countries as well. They also have the opinion that this practice has no pull with the people, and does not affect the government decisions or the actions of police officers. If this is true then then they feel that there is no point of “dividing the people”. (procon para 3)

After hearing about how  disrespectful kneeling during the anthem was I became curious about all of the things that could be considered disrespectful  towards the flag and the things that it represents. I came across an article by Doha Madani which plainly illustrates all of the things that, in a traditional sense, are considered disrespectful to the flag. She says that wearing the flag on clothing or in sports uniforms, carrying it flat(such as at football games), using it for advertising, and putting it on disposable products like forks and napkins.(Madani para 4)  All of these acts are done a one almost a daily basis and has never been pointed out as rude or indecent.

After having the opportunity to read through both arguments it was very clear to me that Kaepernick should be heralded as a 21st century civil rights leader. He had the courage to stand alone in the face of cruelty, ignorance, and pure racism because he felt that his people were getting the short end of the stick. It is people like Kaepernick that are remembered not for their ability on the field, but also their ability to put fame and fortune on the line for what they believe is the greater good.

Madani, Doha.”Here are Some ways to Disrespect the Flag.” The Huffington Post, 24

ProCon.”Refusing to Stand for the National Anthem: Top 3 Pros and Cons.” ProCon, 27

Hey Drew,
I loved reading your post, this is one of the most critical and yet true story in our life time. We say everyone has freedom of speech but when practicing it, it becomes a problem of racism, police brutality and so forth. Protest by athletes by kneeling down has became a highlight during 2017 and it’s still an issue today. Kaepernick kneeled during national anthem which marked the beginning of the protest and many other athletes followed. This articles was helpful http://www.nfl.com/news/story/0ap3000000691077/article/colin-kaepernick-explains-why-he-sat-during-national-anthem

I really like your post. I think they demonstrated such bravery, and they stood up for what they believed in. I think that they were not being disrespectful, the flag is supposed to stand for freedom, and having the freedom to do this is what America is about

Hi Drew,
I found your topic very interesting, its a topic I too have wrote about before. One of the most interesting things from this situation is that there was more controversy when only Colin Kaepernick kneeled for the signing of the Nation Anthem a year or two back, than when almost the entire league kneeled a few Sundays ago in the 2017 season. I was curious to find out why and it seems that people were shocked and taken back when it happened for the first time by one person, than when entire teams did it years later. http://www.cnn.com/2017/10/16/opinions/nfl-bail-reform-opinion/index.html I found this article interesting because it described how people are losing sight of why players are taking a knee. It was in the beginning to fight against police brutality against young African American people, but has grown into controversies over the President, white privilege, and disrespect over the flag. It seems that the original meaning of taking a knee expressed by Colin Kaepernick is the most genuine since he had no intention of disrespecting the country, he was only trying to raise awareness for a cause he believed in. But as entire NFL teams kneeled to address certain comments made by the President, their intent was to revolt against his words, not to raise awareness for a cause.
I hope to hear more about what you think after reading the article I attached!