Take a knee with me

Home Take a knee with me 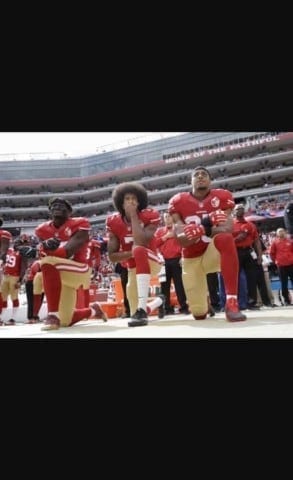 Kneeling during the star spangled banner should not be a problem. If the president or country is not loyal to one, then why be loyal to them? Kneeling is not rude nor disrespectful to the military. They have a choice to voice their opinion, but then again they don’t. They’re being controlled and that is what this all boils down to. According to Tom Zipper and Mike Prada (sb.com), the WNBA started this protest back in July, 2017…July 9th to be exact. They had pre-game conferences about justice and equality and also kneeled. They were fined $500 each for doing so. “We want to be able to use our platforms and our voices”, said by WNBA player, Tanisha Wright. I don’t think I could agree more. Under that statement an anonymous woman said “don’t tell us we have a voice and then fine us for using it.” When we have such strong support behind a worldwide problem we are told to shutup. Some may feel kneeling isn’t the answer, but if we don’t stand up for ourselves who will? Today’s generation is so simple minded and quick to give up. We need these big figures such as the NFL, WNBA, NBA to be our voice, our leaders. We have to not be controlled. History is slowly but surely repeating itself, we have to be stronger than our ancestors were and take advantage! Especially with the resources that we are provided with today.