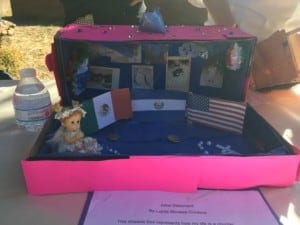 This shadow box represents how my life is a counter narrative toward all of the horrible dominant narratives out in the world. My shadow box is divided into two parts, the outside is the dominant narratives of my life while the inside are my counter narratives. Some of the dominant narratives that I have on the outside are that all females love the color pink, women can be persuaded by diamonds, and that all women must wear dresses to look beautiful for all the men in the world. Also, you might wonder why the background of the dress and butterfly is red. Red was chosen over any other color because it represents how as a Hispanic/Latina I am believed to in the future join a gang. Unlike the outside, the inside is covered in all of my counter narratives. To represent my parents journey to America I decided to make the inside of my box blue. The Mexican, Salvadoran,and American flag represent my ethnicities and the peso is money from Mexico while the quarter is from America and El Salvador (El Salvador used to have their own  money but later switched to American money). I chose to include this because many people may assume that I am just Mexican but I’m not I am also a proud Salvadoran who represents both ethnicities with pride an equal amount. Another counter narrative that I decided to include is that I have had a very happy life in Oakland and I am not miserable. These counter narratives are represented by my baby pictures and my family pictures because I have been very happy since an early age and I don’t feel like Oakland has affected or changed that feeling at all throughout all of these years in fact it has made me stronger. Lastly, I chose to put a keepsake and rosary from my baptism to represent my chosen identity as a Catholic. Being Catholic goes against the dominant narrative that females can’t choose anything for themselves because I chose this religion for myself and if one day I no longer feel like it truly represents what I am fighting for in this world I will, for myself, make a decision about where I will go on from there.