Hello fellow viewer, I would like to introduce you to my fairy tale animation. You’ve heard of Little Red Riding Hood before, right? It’s the story about a little girl who sets out to visit her grandma and meets a wolf. She decides to tell it where she’s going. After that, her grandma is eaten and a little while after, she is as well. My animation provides a choice where you can choose whether or not to tell the wolf where Little Red Riding Hood is going. In my alternate ending where Little Red Riding Hood doesn’t tell the wolf, the wolf ends up dead with axes sticking out of its body. Creating the animation wasn’t a simple process. In fact, I had to first come up with what I was going to make the animation about. I chose a simple, yet meaningful fairy tale and wrote a script based off of the original story, which was written by Charles Perrault. The next step was to create a storyboard for my animation, a reference that I could base my final product off of. After the storyboards were created, I made the actual animation.

The link above is there so you could see the script and storyboards I made for my final animation as well as any modifications made throughout the process.

There are some really good fairy tales out there, as well as some… not so good ones. But Little red Riding Hood by Charles Perrault is a classic. In my scratch animation, the original story is animated, but there is an alternative ending for you to view. Briefly, Red lies to the Wolf and sends him out of town, while the Hunter finds the wolf and a perfect opportunity to make some money. The process was not as simple though. I first had to write the script and create the storyboard for the project (link below), and then the coding could start. There were many different problems that I came across but i finally managed to come up with this masterpiece. A preview of the animation is below. Enjoy!

This is the animation scratch!

This link has the script and the storyboards that were made and used.

What about the Wolf’s perspective?

My Scratch animation explores human morals through a twisted version of Little Red Riding Hood, where we get the wolf’s perspective on the situation Little red Riding Hood is in. Little Red is on her way to Granny’s house like in the original tale, but when she arrives, she feels compelled to ask the wolf about his side of the story. She finds out he is actually a starving vegan, and really need food. Her grandmother calls the hunter nonetheless. Can Red find a way to persuade the Huntsman not to commit the crime? The main characters are Little Red, Granny Lee, Wolfie, Midge Hunt, and Wolfie. Little Red is curios and kind hearted, Granny Lee is quick to judge, Midge Hunt follows the leader, and Wolfie is very kind. I had to code quite a bit and ended with probably at least one hundred tiles in my animation. I found one small mistake in the beginning of my animation while I was debugging and had to go back and do a quite a bit of work to find the mistake and fix it. We started off our projects by making a script on google docs in official script format. We had to revise our scripts two to four times. Once we had finally completed our scripts, we began storyboarding. We had to make storyboards for all three acts. We had to do each one separately, and then revise. After that, I finally began my animation. It took a lot of work to assemble because there was so much coding involved in the process. But I persisted and I finished.
EMBED LINK:

This animation is based on the short story Little Red Riding Hood but with a twist. This little Red has the decision to talk to the Big Bad Wolf or not. That decision will determine her fate.

This is an animated version of Charles Perrault’s fairy tale, Little Red Riding Hood. The story is interactive. You can choose between two different endings of the story. The character makes a decision. Each ending shows a moral of the story. In this animation, Red Riding Hood has to choose between telling the Wolf where she is going, which leads to the original ending, and not telling the Wolf, which leads to the alternate ending.

Here is the animated story below:

This is the link to the final scripts:

Making a scratch animation, is harder than most may imagine. You need to have patience, to sit through all of the technical difficulties that come your way, and be able to fix them. When making my scratch animation, I had an abnormally large amount of obstacles. Firstly, I had no computer for it was broken, proving to be itself a major issue, and creating alternate endings that taught a lesson was also quite difficult.

My animation was based off of “Little Red Riding Hood’, but had a major twist on the plot, while keeping the same lesson, but similar plot as “The Bear”. It took me 3 hours to complete my project, 3 hours of progressive work that is. Once i got the hang of it, the project became easier and quicker to do. I noted that if I laid out all the blocks I would be using, I would save a lot of time by not scrolling around searching for blocks.

In my story, a princess is sought after by a group of criminals. Her father has her locked up in the castle, for her own safety, and she is not allowed to leave the grounds. The nurse in the castle, is also a witch, and offers the princess access to the outside world. The Princess must choose to take the offer, or do the right thing and stay, and learns a valuable lesson either way. “Do not talk to strangers” and “Don’t lie to your parents”.

Follow Little Red Riding hood on her journey through the woods to her grandmother’s house. She will have to make a life changing decision and you, the viewer, will help her choose. Watch this interactive animation and play around with the possible outcomes… Enjoy!

Creating this animation took some time planning. I first read through many fairytales and determined which one had the most clear moral decision. Little Red Riding hood by Charles Perrault stood out for this project.

Next I wrote out a script for the animation. Here is a link to my script:

After, I created storyboards for each different scene. This helps create a visual of the final product.

Next, I created a plan for the making of the animation. This is where I could plan out what days I would dedicate time to bringing the visual to life.

Finally, I created the animation using scratch. This program allows us to use building blocks to animate and program our story.  This also helped us make the animation interactive so that the viewer’s opinion affects the outcome of the animation.

Once the project was completeed, I shared it with classmates in hope of everyone learning a valuable life long lesson…Enjoy!

Creating my final animation was a multi- step process. First of all, we had to pick the story we wanted to remix and brainstorm ideas on what the alternate ending could be.  Next, I wrote a script, which was based on my story, it included the first act and the two different endings (original, and alternate). I included stage directions in my script as well because it would help me out while I was completing my animation since I would know where the sprites go and what they do. Then, we were responsible to complete two storyboards: one for Act 1 and the other for Act 2a and Act 2b. This step was important because it helped me visualize all my written down thoughts into pictures and it helped me see the facial features/poses of the sprites to make the animation better. Lastly, with the help of my script and storyboard, I created my final animation and made sure to give credit to all the sources that helped me create the animation such as the author of the original story and the source I found my story from. As a result, I made an interactive story based on a fable, Little Red Riding Hood,  that allows the viewer to decide which path they want to go in.

Link to my Script:

My Act 1 and Act 2 Storyboards: 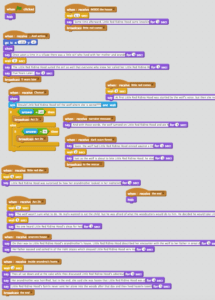 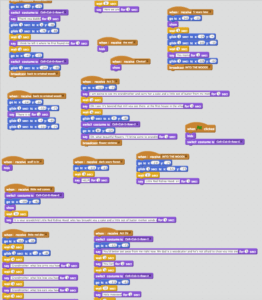 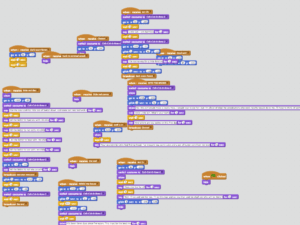