The Fox and The Horse REMIXED

This fairytale describes the consequences of what happens when you are arrogant and don’t ask for help. This message revealed through following a horse who knows he has grown old and must decide to ask a fox friend to help him achieve his goals or not. Whether he does or not is completely up to the viewer. However, do understand that there ae two endings based on such decision.

To watch the animation press the link:

I chose to animate this fairytale because not only does it show to not be arrogant, but it reveals that you shouldn’t be afraid to ask for help. It took some time to figure out to make it interactive, but responsive to many answers to the question. The two endings are decided by choosing “yes” or “no”, or any other form of an answer either beginning with “y” or “n” The endings are truly considered the opposite and reveals the consequences of having arrogance. I attempted to portray an important message through a humorous animation.

To see the script I followed press the link: 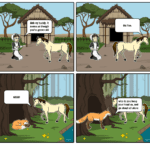 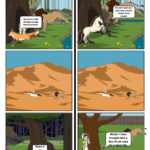