Why housing prices are overwhelmingly high?

“Everybody expected housing to really sort of dry up with the rest of the economy,” said National Association of Home Builders CEO Jerry Howard. “And in fact, the opposite has happened. People who have been sort of scared out of the cities by the pandemic.” (https://www.noradarealestate.com/blog/housing-market-predictions/) Georg Chmiel, executive chairman of Juwai IQI Group, Asia’s largest real estate technology group, said in an interview with China News Service that housing is always in a recession, both in the United States and around the world. People lost their jobs and stopped dreaming of bigger houses.But in the second quarter, amid the worst global recession since the 1940s, global house prices rose a robust 4 per cent. Us house prices are a classic example of a bucking trend. Since May, sales of new homes have climbed 67% and prices have risen 15%. Existing home sales in the United States reached 6.54 million units in September, up 9.4 percent from the previous month, up nearly 21 percent from a year ago, and the highest in nearly 14 years. The median sale price of existing homes rose to $31,800 in September, a record high for the fourth straight month and well above the pre-financial crisis peak. At the peak of the housing bubble before the financial crisis in 2007, the median sales price of an existing home was roughly $230,000.
Home prices are now rising in the single digits, having passed their peak growth rates. These market trends point to a positive development for buyers as we enter the second half of this year. Median listing prices in several metro areas are continuing to fall, owing to an increase in lower-priced houses. New sellers are entering the market at near-normal levels, and while property prices remain high, they may need to consider pricing more competitively in the near future.(https://www.cnbc.com/2021/05/25/why-houses-are-so-expensive-in-the-us.html) Moreover, the shortage of the market leads to a continuous decline in inventory. The total inventory of homes fell to 1.47 million from the previous month and a year ago, a record low of 2.7 months at the current pace of sales. “Typically, U.S. home sales flatten out at the end of the year, but in September, they surged beyond what we normally see for this season,” said NAR chief economist Lawrence Yun, attributing the anomaly to record-low interest rates and the large number of buyers on the market, including vacation home buyers, Because working from home gives you more flexibility. Xu Xiaile, chief market analyst of Shell Research Institute, told China News Service: “The warming of the US property market in 2020 is mainly driven by residents’ increased purchasing power and preference for real estate under the open-ended quantitative easing policy. In short, too much water. On the one hand, unprecedented loose monetary policy has enhanced residents’ purchasing power. Since March this year, the Us Federal Reserve has launched quantitative easing, a policy with no limits and no limits, in response to the impact of COVID-19. Data show that in September 2020, THE M2 in the United States expanded to 18.6 trillion US dollars. In recent May, the year-on-year growth rate of M2 stood at a historical high of more than 20%, and continued to expand, reaching 24% in September. Meanwhile, fixed rates on 30-year mortgages accelerated to a historically low 2.81 per cent at the end of October. Under the loose monetary policy, it is easier for home buyers to get loans, the cost of loans is lower, and the purchasing power of housing is improved. On the other hand, under the background of loose liquidity, the real estate in the core area is favored. In the context of global monetary easing and liquidity flooding, capital preference has a good underlying core area property market. George Chmiel also said the surreal situation is actually the result of government policy. As central banks pumped money into credit markets, 30-year mortgage rates, which had been falling for years, plunged to record lows – below 3 per cent in the US and below 2 per cent in Europe. “If you’re dreaming of riding out the plague in a big house, cheap mortgages are now beckoning you to take action.” The average rate on a 30-year, conventional, fixed-rate MORTGAGE fell to 2.89% in September from 2.94% in August and fell further to 2.83% in October, according to Freddie MAC. That compares with an average of 3.94% through 2019.
A lack of supply has also been cited as a major factor in pushing up US house prices. The national inventory of homes totaled 1.47 million at the end of September, down 1.3% from August and 19.2% from 1.82 million a year ago, according to the NAR. At the current sales pace, unsold inventory takes 2.7 months to clear, down from 3.0 months in August and 4.0 months in September 2019. Notably, 71 percent of homes sold in September 2020 had been on the market for less than a month. “There is no shortage of promising, potential buyers, but inventory is historically low,” Yun said. “We have seen some homebuilders move to increase supply, but there is still demand for more homes.” A rapid increase in new supply will not be easy. The number of new homes started through June was 4% lower than the 1.235 million units started in June 2019. George Chmiel says planning constraints make it difficult to build new homes where they are most needed.

The College Debt Crisis in America

I decided to explore three articles referring to college debt. This is a subject I’m not particularly well versed in, but it impacts me and my family as well as people I know. In applying to colleges, I have learned that achieving a higher learning degree is expensive. I have had to do my own research on ways to supplement money for a university degree. These articles illustrated how deeply college debt impacts the United States and which specific populations are affected by this epidemic.

The total student loan debt in the USA is $1.52 trillion. States with larger population naturally have the larger student loan and, subsequent debt, amounts. Surprisingly, the largest increase in student loans in the past ten years has come from the age 60-69 demographic, however prominent this increase is, this is also the age group with the lowest increase. The age group demographic of 30-39-year-olds have faced the greatest increase in amount. However, people under the age of 30 still owe the most money. These statistics are provided by Forbes.

My favorite article that I looked at was the third:  Betrayed By the Dream Factory.  This postulated ideas based on the massive student loan debt in America that stated college as potentially not being worth the lifetime of debt and loans it gives people. I think that obtaining a higher education is more than worthwhile, but the severity of financial injury it is bestowing upon the next generation of Americans is not worthwhile. How well does a college education face up to a crippling debt that quells the dreams one went to college to realize in the first place?

Most of all my research and annotations made me a little scared for how wanting to obtain a college degree is going to impact my financial situation in the future. I think that there are a plethora of solutions that could be implemented to lessen, or even relieve, the massive debt on students’ shoulders, and I think it is the American government’s responsibility to deal with this major issue.

I annotated articles regarding College Debt on Now Comment HERE 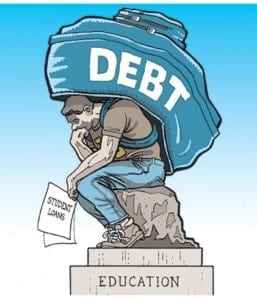