The Root of Gender Stereotyping

Gender related stereotypes are still a huge problem in today’s society. Movements like the Women’s March have successfully tried to combat these social norms, yet women are still being held back. Women only make up 6.4% of the Fortune 500 CEO roles. Since 1959, 411 women compared to the 1930 men, have been nominated for a Grammy. Yet we put so much emphasis on breaking these stereotypes, and paving a path towards successful for women, so why hasn’t it been successful? These stereotypes, the stigma we hold, has been engraved in us since the day we were born.

Scientists are beginning to study how parent’s behavior and treatment towards their sons and daughters affects their development. While many parents think that their children naturally exhibited behavior associated with their gender, Lawrence Cohen, author of “Playful Parenting,” explains that while inborn differences do exist, they are quite small. “Girly girl” or “boyish” behavior is nurtured by the behaviors of parents and older family members.  Studies show that despite popular beliefs, from 6 to 12 months olds both boys and girls prefer to play with dolls rather than trucks. Sex-based play preferences occur around age 1. This is because toddlers begin to grasp their gender identity and conform to how they see older boys or girls behaving.

Kids quickly learn what they can and can’t do based off of these gender-related messages. Messages like girls are more nurturing and boys are more math and science oriented can also impact their academic paths and interests as well as future career choices. It can even impact the way they view the opposite sex. If young girls see fathers not approving of his son showing his emotions, it may lead them to think that it’s bad when men show that they are sad or upset. This could be directly linked to mental health issues such as depression, anxiety, and suicide. Men are less likely than women to seek help for depression, and while women suffering from depression are more likely to attempt suicide, men are more likely to die by suicide. Because we teach young boys to not show their emotions, it ultimately grows into a greater problem as they get older. Young girls, on the other hand, tend to carry parental disapproval into adulthood. Women are also more self-critical than men, which can be connected to the large percent of women and adolescent girls who have body-dissatisfaction leading to eating disorders such as anorexia, bulimia, and purging.

Through a google search analysis, Michael Gonchar found that American parents do have different expectations for their kids based on gender. Overall, they were more worried about their daughter’s waistlines than their son’s, and focused more on the intelligence of their son’s than their daughters. Of all Google searches starting “Is my 2-year-old,” the most common next word is “gifted.” And parents are two and a half times more likely to ask “Is my son gifted?” than “Is my daughter gifted?” This is very ironic though considering girls in American schools are 11 percent more likely than boys to be in gifted programs.

While society strives to break the social stigmas surrounding gender, we must begin to realize that these stereotypes are being engraved into us as soon as we are born. From the color of the walls in a nursery to the toys we play with, they all factor into how we perceive ourselves and the opposite sex. While completely eliminating gender stereotypes is almost impossible, we can at least continue to try and break the negative ones in our cultures today.

The Boy and the WOLF- Remixed

About the BOY AND THE WOLF

The boy and the wolf is a fable by one of the most famous author Aesop, is about a wolf who does not do what his life mission is which is to go against humans and kill them. But in the story he does not do this and when the boy asks him to play a song his wolf pack kills him. The moral was that you should not be who you are not. In the fable the wolf was a piper instead of a butcher.

I first wrote my script which had what the charecters were going to say. It had the 2 acts were the desicion was being made one decision was the posotive and the otherone was the negative. Then i made the story board which showed what the animation would look like. After storyboard I made the actual animation.

The storyboard clearly expressed my final decision and I was very pleased with it. I worked in both school and home, however, more time was spent at home. The final scratch animation gives consequences on both versions of Act 2 based on the main decision made at end of Act 1. In act IIA the wolf plays a song for the boy which makes him a piper making the wolf get killed. In act IIB the wolf kills the boy and becomes the butcher making the wolf pack proud. 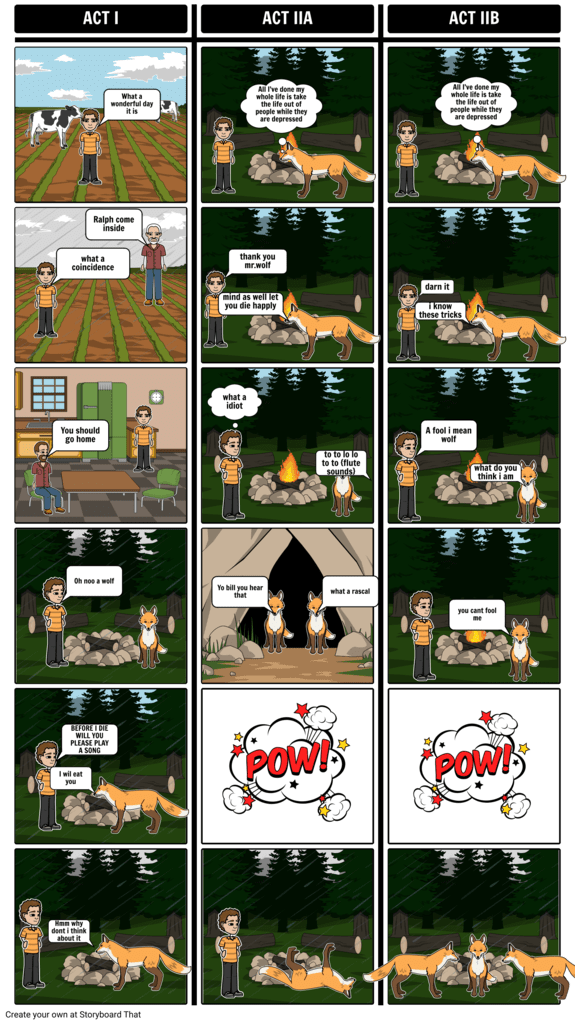