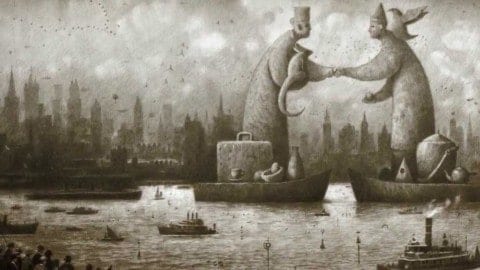 The second chapter in the arrival is very important chapter because it give the reader a view of the immigration process. The main character, in this part of the history is some countries welcome immigrants, and these statues are an example of immigration  because one of them carries the symbol of the suitcase and the other statues is like giving him the welcome by shaking hands respectfully. And both of the statues carry different kind of animal representing peace.

Chapter II, is the chapter they used to show the new country or city he when to.  The chapter start with the father in a ship that is supposed to him to that new places.  When he finally get to that new places he saw a statute of that It look like a immigrant and a person that is from places.  We learned that to go in that new places you need to go through some physical test . he also when through some question where they ask about why he was there,  he talk about his family. After this he when in some type of hot air balloon here he see the entire city, he had some problem because he didn’t know league they speak, a will later he used paper to draw a bed trying to get a places to leave.  Affect a will he rent a apartment where he find a weird animal that he keep as a pet. The chapter ends he looking at a picture of his family will we get to see the city one more time.

The chapter II takes place in the boat when the father are traveling, after the father arrival to a new place with different animals, plants, people , language, and culture also a new type of life.  After the father arrived he pass a type of immigration and there was a Doctor and after that the Doctor gave him a weird Identification, he leaved of there, after that he are looking for a hotel and a random guy helps him. When he enters their room, discover rare artifacts, He opened their suitcase to see their family photo therefore he felt sad.

The setting is important because show how the story are going and explain the situation and actions of the characters and the environment.

There is a lot of important information that can help us understand the book. “Much of this work was inspired by anecdotal stories told by migrant of many different countries and historical period, including my father who came to Western Australia from Malaysia in 1960.” This quote shows how immigrant people from other countries, collaborated (or worked) with him to write his book. It also shows how they got they own support to show people how immigrants can make your dreams come true. This information also is important because even though Shaun Tan want immigrant he spoke to many immigrant before he wrote his book.

“In trying to re-imagine the experience of immigration, it seemed that a visual story without any words would best capture the feeling of uncertainty and discovery all immigrants feel”. With this quote Shaun Tan was trying to make the readers understand what every immigrant feels about that experience, and how they miss their family because they had to immigrant to other country to make some money and help his family.

Something I find interesting about  chapter II is the way they used to show this new place. This image with used is a great example because  it show us how people see new places and how the society is affected with it. Us the immigrants have different point of view of new country but we all come for a future.

Chapter ll is very important part of the arrival. The author show to the reader a different point of view of the immigrant. We can see how Shaun Tan show that people immigrant for many different reason and looking for a better future. Some  people immigrate for education, better security for them child, money, and some people leave because the corruption of the government in they country, it’s a good decision that people can choose a better type of live. This opportunity give them the chance to improve they self, and take all the negative things of they life, and show to other people that you can change everything of your life but only if you want to change that.

I am agree with your post “setting chapter 2 The Arrival Because… info and show to the readers what is the process for the man to get in the new city and its something that imigrants know
One sentence you wrote that stands out me is: “after the father arrival to a new place with different animals, plants, people , language, and culture also a new type of life.” I think this is how every immigrants feel.

dear:students, i am agree with your post symbolism on chapter 2 of the arrival, because all yours said its true how fathers and mothers leave of theirs countries to help theirs family for many reason and to resolve the problem they got

dear classmate, i like the summary because is very detailed and we can understand the chapter without reading it, also it tell shows us why the setting is important

Dear Delsy
I really like this chapter II of The Arrival because the way your group and you express the feeling of the man getting in the new country. One thing I really like it was ” When he finally get to that new places he saw a statute of that It look like a immigrant and a person that is from places”. This is a good connection because the author message about all the book its about immigrants and that’s what i like it

I am happy with your central idea in chapter 2 of the arrival, because it is really important. It helps me in my understanding of this chapter. this central idea helps us understand or have an idea of how immigrants are received in new countries and in my opinion its a very good argument. another sentence that I liked was is because I can connect it with my life because when I arrived in the united states they gave me a very good welcome

this group wrote a good summary!