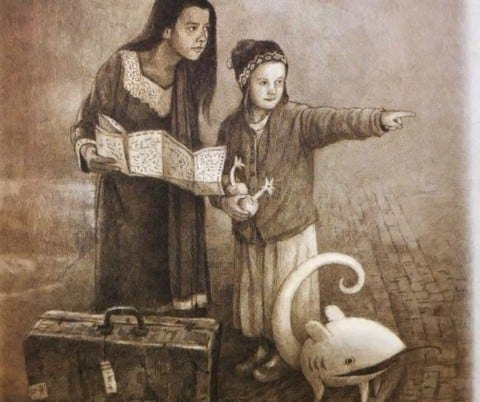 In this chapter, the story continues with the family sitting on the table eating their breakfast, we can notice that they are having a good conversation and that the father is giving his daughter something on her hand, its looks like the father is explaining something to her about the thing that he gives to her, after that little girl was preparing to go outside by being helped by her pet to change her clothes, when she went outside she saw something similar to clocks but smaller ones. After we see the city where she lives, is different from the place where she used to live before, it has big buildings, statues and streets. The people use to walk with their pets, by the color of the picture give the vibe of a kinda sad place but we know that in the place the “New Home” where she lives now is much better. Then we see the girl playing with two cats accompanied by her pet,  Then she says goodbye to them and goes to look for what her father found and what they were talking about at the beginning of the chapter. Now on the last picture of the chapter the little girl was going back home with the “Strange flowers” that she was looking for, then she saw a lost woman, she looked like she were an immigrant because of the suitcase that she got and her map, she stops the girl and asked her about the location of some place, the little girl helped her.

The image on the last page of the book represents a literary element,  Characterization. We can see that in the image there is a girl that looks like she is lost, we also can notice that she is an immigrant because of the suitcase that  she is carrying and the map that she have on her hands, but when we focus on the little girl helping her we can notice that she is telling her something or helping her because of her finger pointing to somewhere. On the chapter we can see a lot of images that represent many ideas of literary elements and the differents reasons why the people immigrate to new countries to get a chance to change their lives.

Research about the author :

The author of the Arrival, Shaun Tan, is a Australian artist, writer and filmmaker. He won an academy award for the last thing, a 2011 animated film adaptation of a 2000 picture book he wrote and illustrated other books he has writes and illustrated include the red tree. He grow up in the northern suburbs of perth western australia in school he became better known as the “good drawer”. Shaun began drawing and painting images for science fiction and horror stories in small-press magazines as a teenager. He was story about the immigrants because his father migrated from China to Australia before he was born, therefore he grew up listening many of his father’s immigration stories. (Cite the website)

Chapter VI is very important part of the Arrival. The author begins show the reader what life is like for the family after they have adapted to life in the new country. Shaun Tan uses the symbols in this chapter to show that many people migrate for many reason still leaving some important that is the family but overcoming for give to his family the better life that they need it. Therefore the people in a strange country, they pass bad because the language cannot help them but when they going thinking in overcome they archive.