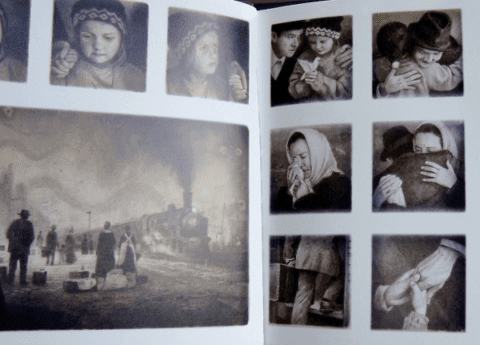 This image represent how they want each other we going to start with the first part of the image, he give a origami of a white pigeon that represent freedom and peace but she is not all in peace knowing that his father is going to travel for a long time  for that give a hug, and his wife are sad that she don’t know if he going to be a life or that is going to be a better life so give a hug to because want to remember forever and he go to seek a new life for all of they,and finally the part where they hold his hand represent that don’t forget his family never

At the beginning, the story is shown in a somewhat tetrico place, a place where happiness was not seen, where they go hungry and had needs, where, there are many strange animals, as they represent danger, as if giving a warning like seeing them

The author says, “The entire book is a general metaphor not only for immigration, but any major life change which involves sacrificing something familiar for the promise of something unknown” (www.booktopia.com). This is important because the book give a message of all change in live not just about immigration like the quote said is about all the changes on your live like changing of family,work and economy things and in some cases emotional problems.